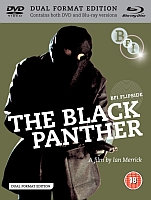 New to Dual Format DVD/Blu-ray courtesy of the BFI Flipside stable, Ian Merrick’s serial killer drama The Black Panther (1977) was hounded out of cinemas upon its original release thanks to a media-driven witch hunt, appalled by the film’s non-sensationalist, clinical exploration of real-life murderer Donald Neilson. Comparable with Michael Powell’s Peeping Tom (1960), though marginally the inferior film, The Black Panther represents the very best of 1970s British filmmaking – and the very worst of humanity in its titular psychopath.

Established screen actor Donald Sumpter plays namesake Neilson, aka The Black Panther, a rigorously regimented ex-army officer with a penchant for robbery, homicide and kidnapping. Gunning down an elderly man near the beginning of the film following a botched burglary, Neilson shows little remorse in taking more innocent lives as he embarks on a violent killing spree. His long-suffering wife and daughter remain unaware of their husband/father’s heinous misdemeanours, his long absences dismissed as merely work-related. 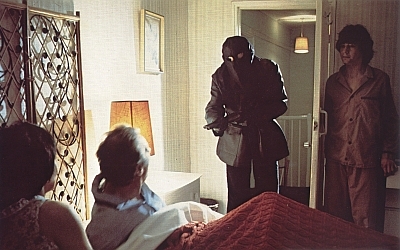 Eager to make more money than a life of turning over village post offices can offer, Neilson decides to kidnap a 16-year old heiress, holding her ransom to the princely sum of £50,000. However, following a series of unfortunate events, Neilson finds himself backed into a corner, on the brink of his most abhorrent crime to date.

Sumpter is excellent in an extremely difficult central role. Whilst not quite humanising Neilson, he is at least able to convey the fear and desperation that slowly infiltrates every part of his being, transforming a once confident and drilled military man into an error-prone psychotic. Also worthy of note are the two female leads, Nielson’s wife and his kidnap victim (played by Marjorie Yates and Debbie Farrington respectively), who thankfully imbue their characters with personality and depth rather than playing mere subordinates.

Simply shot, yet tense and unnerving throughout, Merrick’s The Black Panther is one of British cinema’s forgotten cult gems, a dark, nihilistic thriller that deserves its place with the Wicker Mans and Straw Dogs of this world. Hopefully, this BFI Flipside reissue will go someway towards the a revaluation of the film’s cinematic and cultural significance.