Peccadillo Pictures have once again compiled an eclectic mix of gritty queer shorts, with the aptly-titled collection Boys on Film: Cruel Britannia (2012). These moody meditations on young men coming to terms with their sexuality and the tribulations they encounter in the process are visually arresting (as in director Jason Bradbury’s Isle of Wight-based drama We Once Were Tide [2011]) yet hard hitting in equal measure.

Starring predominantly little-known actors, there are also cameo appearances here from the likes of Paloma Faith, Eddie Marsan and Jonathan Firth (Collin’s younger brother). The overriding impression that Boys on Film: Cruel Britannia leaves the viewer with is of sensitivity towards a subject frequently trivialised in an overtly-sexual and gratuitous manner. Coming to terms with your own sexual orientation – whatever your background – is never easy, and these films treat a delicate issue with compassion and understanding. 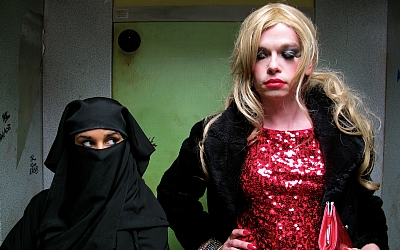 Inevitably, some of the films featured are more memorable than others. David Ward’s All Over Brazil (2003) stars Iain de Caestecker as Stephen, a young boy in 1970s Glasgow who’s more interested in glam rock than his widowed father’s obsession with football and beer. The similar subject of a father’s reaction to his son’s situation is dealt with in a much more brutal and violent manner in David Leon and Marcus McSweeney’s equally hard-hitting Man and Boy (2010) which, like many of the collection’s stories, ends on a distinctly dark note.

Faryal’s What You Looking At? (2011) is another of the collection’s highlights due to its deft handling of what could have been a sensitive subject to many. The inclusion of this short ensemble comedy, featuring Michael Twaits as a drag queen and Hussina Raja as a young Burqa wearing Muslim, whose barriers of understanding and acceptance are broken down when they become stuck together in a lift, leavens what could have been an all-pervading bleak tone for the Cruel Britannia collection, whilst instilling its general message of acceptance, both personally and collectively.