There’s something immeasurably likeable about British-born action mega-star Jason Statham, who has kicked and chopped his way to the top of his game, seemingly with little or no actual acting talent. His latest film, Boaz Yakin’s Safe (2012) (exec. produced by Kevin Spacey no less) is a hackneyed re-hash of action thrillers of the past, pitting the Triad and Russian mobsters against corrupt police and Statham himself. Yet, as with the Schwarzeneggers and Stallones of this world, the film is made eminently watchable by its one-liner spouting star.

As previously mentioned, the film’s actual narrative is of little or no consequence. Taking a number of cues from 1998 Bruce Willis-vehicle Mercury Rising, Statham’s ex-cop, ex-cage fighter (!?) Luke Wright finds himself the unlikely guardian angel of Mei (Catherine Chan), a young Chinese maths genius wanted by the ‘bad guys’ because of her incredible ability to memorise complex number chains – including all-important safe combinations. With the Triad, Russian Mafia and NYPD all closing in, Wright takes it upon himself to protect Mei – no matter what the cost. 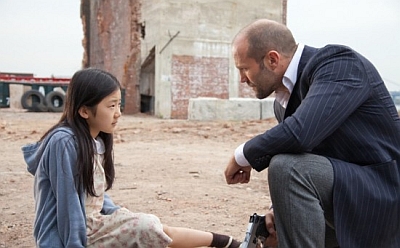 At a number of points, Safe treads dangerously close to made-for-TV movie territory, thankfully saved by some frenetic action set pieces, some choice quips (“It’s a nice drive [to Seattle]…if you like trees and shit”) and the bizarre magnetism of Statham himself. In Statham, 21st century Hollywood cinema may well have unearthed the next Schwarzenegger, and endlessly quotable brawler with an uncanny sense of comic timing. The homeless, widowing Wright is perfectly suited to the British leading man, as he throws himself into all manner of suicide scenarios with ‘nothing to lose’.

As with the majority of Statham’s work (with the exception, obviously, of The Expendables franchise), the supporting cast are largely unremarkable, consisting of a series of corrupt cop/foreign mobster stereotypes, all with the sole intention of chasing Wright and Mei around New York. One thing seems certain – if you’re not already a Statham convert, Safe is unlikely to improve your opinion of the shaven-headed slugger.

To the credit of both the film and its director Yakin, Safe is perhaps the purest, most non-pretentious action film you will have seen thus far in 2012 (released, as it is, before the much-hyped arrival of Gareth Evans’ The Raid in May). As far as brash, testosterone-fuelled entertainment goes, with Statham you know you’re in safe hands.