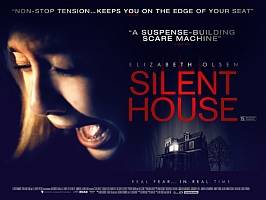 All too often it seems, promising films are derailed by a hopelessly lacklustre finale, which is unfortunately the case with Chris Kentis and Laura Lau’s initially atmospheric chiller Silent House (2011) (an English language remake of Uruguayan film La Casa Muda). Showcasing the talents of Elisabeth Olsen (this film wrapped before Olsen began shooting on the critically-lauded Martha Marcy May Marlene) and thankfully bucking the found footage formula trend, Silent House is unfortunately scuppered by some ludicrous, highly illogical leaps of faith in its final third.

Olsen plays Sarah, an enigmatic young woman introduced whilst loitering outside a grand, seemingly derelict house. We soon discover that this was once her family home, and is now in the process of being re-wired and renovated by her father and uncle, with a view to a swift sale. After an awkward meeting with an old childhood friend (whom Sarah has no recollection of), our pensive protagonist sets about boxing up her childhood possessions until she is startled by a number of loud noises coming from the upper floors. With her father nowhere to be found, Sarah finds herself frightened and alone, unable to comprehend exactly who – or what – is prowling in the darkness. 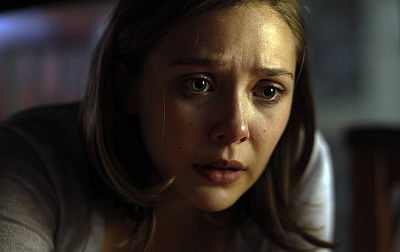 It’s certainly difficult to surmise Silent House’s overall tone without, in some way, encompassing its ludicrous denouement. For a large stretch, the film is engrossing, jumpy and competently pace, and will more than satisfy those looking for impromptu ‘bumps in the night’. Sadly, the final reveal (which will remain undisclosed for those willing to invest in the narrative proper) is devoid of almost all plausible logicality, proving all-but indecipherable to those who haven’t seen the similarly bizarre Uruguayan original.

Despite an undeniably fraught and tense opening 45 minutes, the final chapter of Silent House is so mind-numbingly dire as to completely undo all the good technical work invested in the initial two thirds. Olsen’s performance is a worthy draw, yet even despite her best efforts, Silent House remains an intangible folly, caught between atmospheric chiller and inconsequential farce. Jumpy moments are near unavoidable, but with little or no plot to drape these ever, Kentis and Lau’s film relies too heavily on loud noises and cheap visual tricks to startle its audience into caring.

Olsen will undoubtedly go on to much bigger and far better things (read our review of her 2012 Sundance hit Liberal Arts here), but sadly the same doesn’t seem likely for Silent House two directors despite the impressive Open Water (2003), now responsible for one of this year’s most infuriating, frustratingly hollow horrors.