Canadian director David Cronenberg’s most recent strides in the world of film have been far less fantastically and brutally graphic than that of his earlier work such as Rabid (1977), Videodrome (1983) and The Fly (1986). Nonetheless, Cronenberg has retained a visceral quality omnipresent in a body of work that has covered over three decades, and 2012’s Cosmopolis – an adaptation of Don DeLillo’s book of the same name – is illustrative of a filmmaker still bent on cramming his movies with metaphor and social commentary.

28-year old Eric Packer (Robert Pattinson, R-Patz to his friends) is something of a financial genius, held aloft like a king by the economic world. Having always been one step ahead, Packer’s paranoia mounts as he becomes fixated on the rapidly growing exchange rate of the Yuan, which counters his bet against it as a growing currency. With capitalism seemingly heading towards a demise of sorts, Packer – bizarrely – appears solely committed to achieving one thing: getting a haircut from his father’s old barber. As his trip across mid-town Manhattan unfolds, Packer starts to piece together clues that lead him to a most terrifying secret – his imminent assassination. 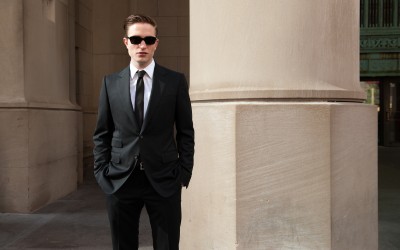 Cosmopolis sits somewhere between Cronenberg’s earlier corpus of gruesome body horror (without the outright visceral gore), and his more recent meditations on the darkness inherent in humanity, as seen in both A History of Violence (2005) and Eastern Promises (2007). These recent films are in no way less vivid, imaginative or powerful than their predecessors, and if anything display the hallmarks of a director who has evolved and found a new means of expressing himself.

To successfully achieve yet another complex literary adaptation, Cronenberg has employed real wealth and diversity in talent to deliver his own interpretation of Cosmopolis. With Pattinson, star of The Twilight Saga, as his lead, Cronenberg clearly took something of a gamble in casting his enigmatic central protagonist. Regardless, Pattinson produces a performance rich in mood, tone and delivery, comfortably embracing a plot full of seriously bizarre and awkwardly funny moments, vindicating the Canadian master’s bold call. In support, Paul Giamatti, Juliette Binoche and Sarah Gadon are also well-chosen for their respective – if slight – roles.

Cosmopolis is a hugely timely piece that, during its production, fortuitously happened to mirror the various ‘Occupy’ movements taking place on a global scale. It’s cinematic release is certainly foreboding, telling a dark story – in typical Cronenbergian fashion – that is very close to home today; a stylish think-piece for our times.