Newly restored 1949 comedy classic Passport to Pimlico is a fine example of a post-war comedy produced by the renowned Ealing Studios. Written by the highly talented T.E.B Clarke, (who was responsible for another comedy classic, 1951’s The Lavender Hill Mob) and directed by Henry Cornelius, Passport to Pimlico shows a great understanding of the mechanics of not only great writing but also of comedy.

After an unexploded bomb detonates and reveals a hoard of treasure, the residents of Pimlico discover an old treaty that allows them to declare the area the independent state of Burgundy. After the initial elation of a world without rationing and government bureaucracy they find that being British actually had more advantages than they first thought. 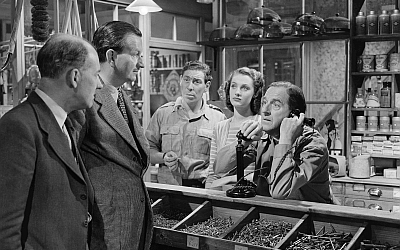 What stands out about Passport to Pimlico is the quality of the writing. Writer Clarke worked at Ealing between 1943-1957 and was known to be a meticulous researcher. This is clearly shown in the level of historical detail in the screenplay. Clarke’s idea for the film came about whilst reading a history book and queried ‘What if the Duke of Burgundy had survived the Battle of Nancy and sought asylum in England?’ It is not a typical method or plot that you would typically associate with a comedy but Clarke is so expert at his craft that he makes it work splendidly. Furthermore Clarke has taken this historical premise and given it a contemporary twist by analysing the feelings of the average Brit in the post war years. Issues of rationing, town planning and the bureaucracy of government are satirised in a charming and highly comical manner.

As well as being a delightful comedy, Clarke and director Cornelius have neatly dissected the British identity summed up with the wonderfully comic line, “It is just because we are English that we are sticking up for our rights to be Burgundians!” Importantly, the characters are everyday people placed into an extraordinary situation which provides the perfect context to give maximum scope for comedy across a range of friendly and lovable characters.

The performances are also of the highest calibre, featuring the magnificently eccentric Margaret Rutherford (who is perhaps best known for her Miss Marple films of the 1940s and 50s). Comedy stalwarts also feature including Hermione Baddley as Edie and an early performance from Charles Hawtrey before he joined ranks with Sid James and Kenneth Williams in the Carry On films.

Passport to Pimlico is a light-hearted, well-written comedy starring fine comic actors and is as entertaining today as it was upon its release in 1949.

Passport to Pimlico screens as part of StudioCanal’s Made in Britain series. For more info, visit independentcinemaoffice.org.uk/films/madeinbritain.