Many films are based on books but rarely is it a self-help book – but that is exactly what director Tim Story has done with Think Like a Man (2012). Based on the best-seller of the same name by comedian and relationship guru Steve Harvey this romantic comedy sees four diverse thirty-something men have their love lives shaken up after their girlfriends buy Harvey’s book.

From this trite rom-com’s animated opening sequence, depicting primitive man engaging with the earliest forms of relationships, audiences will be aware of what is in store for the next 115 minutes. Establishing that ‘the rules have changed’, modern men are presented as a diverse bunch, ranging from ‘players’ to mummy’s boys. Making sure that every male stereotype is on display, we are treated to dull conversations set in either a bar or basketball court where this group of men offer each other advice on how to treat women in order for their relationships to work. Relationships are portrayed as a battlefield, at one moment compared to both Gettysburg and the Normandy landings (!?), where the best strategy is to be manipulative, change yourself for your lover or be doomed to a life of singledom. 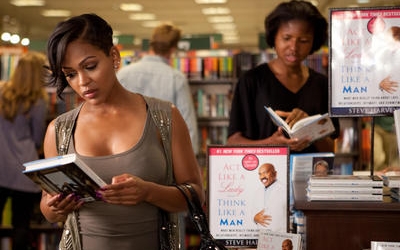 Think Like a Man sets out to be a modern rom-com for the modern world, something audiences will be frequently reminded of via blatant references: “What, does she think this is the 1950s?” Poor scriptwriting aside, the concept of exploring modern relationships isn’t a bad idea. However the portrayal of these lifestyles and concepts is delivered poorly. A series of tiresome back-and-forths between the group of men and women (mirrored of course to show opposite outlooks) are bandied about, managing to tick just about every cliché possible. The scriptwriters appear to be more concerned with packing in ‘humorous’ quips and jokes than anything else.

Rather than develop interesting characters the audience have each stereotype laboriously spelt out to them – the player, the mummy’s boy, the dreamer. Audiences are spoon-fed obvious information and the writers have been too lazy to develop interesting rounded characters. Worse still, at halfway through, is the clumsy plot point where the men, referred to as ‘The Band of Brothers’ discover the existence of the self-help book and what their girlfriends have been up to. Undoubtedly the films problems stem from the source material. Harvey’s book may have sold over two million copies but this doesn’t make it movie gold.

Rom-coms often follow a series of clichés, and audiences expect it of the genre, but the pay off is that it has to be at least mildly entertaining. Think Like a Man fails to do this and doesn’t even provide enough to make for a guilty pleasure. It is nothing less than a tiresome collection of boring stereotypes that makes for awkward, dull viewing.