When we’re dreaming, time moves differently. We don’t notice while we’re sleeping, but it does; a second of real time can feel like minutes, or even hours, in dream-time. It’s a concept that’s taken to its thrilling logical conclusion in Inception (2010), as writer/director Christopher Nolan spins out a tale of action, love, loss and intrigue on a grand scale.

In a near-future where technology makes it possible people are able to share in each others’ dreams, extractor Dom Cobb (Leonardo DiCaprio) makes a lucrative living through the highly illegal practice of navigating a target’s subconscious and stealing information while they sleep. On the run from US officials, Cobb yearns to return home to his children and is offered the chance by the powerful businessman, Saito (Ken Watanabe). 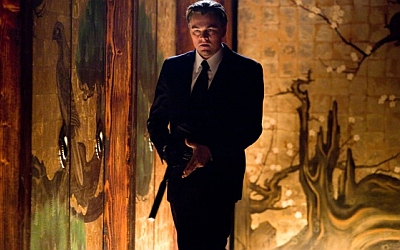 In order to gain an advantage over his main competitor, Saito wants Cobb and his team to do something even more difficult, the art of ‘inception’; not taking information, but planting an idea in the target. In this case, Saito’s corporate rival, Robert Fischer Jr. (Cillian Murphy), must be persuaded to destroy his own father’s (Pete Postlethwaite) company. In order to do this, Cobb assembles a skilled dream-team, including right-hand man Arthur (Joseph Gordon-Levitt), con-man Eames (Tom Hardy), architect Ariadne (Ellen Page) and Yusuf (Dileep Rao), a chemist to control their depth of sleep.

Creating three layers of dream in which the characters sink deeper and deeper into Fischer’s subconscious, Cobb’s team find themselves under more and more pressure, as the layers of Fischer’s dream become further and further removed from reality, with time moving progressively slower as they travel between the dreams. The fight and chase-sequences within Inception are undeniably satisfying. Hardy (who plays main antagonist Bane in Nolan’s The Dark Knight Rises) essentially gets to play a James Bond-like figure, jetting down snow-covered mountains, shooting faceless enemies and blowing up glacial hideouts whilst Gordon-Levitt’s Arthur tumbles down zero-gravity corridors, grappling with thugs.

It’s a stunning effort all round from cast and crew alike, but although the relationship between DiCaprio’s Cobb and former wife Mal (Marion Cotillard) is the emotional core of the film, it’s the interaction between Cobb and his young protégé, Ariadne, that provides the best moments of the movie. Not only does Page get some of the most remarkable scenes visually, but her cautious resistance in the face of Cobb’s potential breakdown gives the character real strength.

Flaws are few and far between, with some unnecessary repetition, a couple of heavy-handed emotional cues and perhaps a little too much exposition for some people’s tastes. Overall though, Nolan’s Inception triumphs in the manner of the best summer blockbusters: it’s awesomely original, hugely intelligent and, above all, enormously enjoyable.