Since its release 12 years ago, British director Christopher Nolan’s Memento (2000) has continued to intrigue and delight viewers. A film which propelled Nolan into the Hollywood limelight and got the masses talking, it’s of no wonder that when taking into account its unique and perplexing narrative, ingenious directorial craft and imaginative editing, audiences have been so enraptured. As a talking point, the film’s brilliant and innovative storyline is probably the first subject that would arise in discussion.

Besides its unique and complex non-linear narrative structure (something which can only be described as a postmodern theorist’s wet dream), Nolan’s ingenious thriller pays a real interest in how perception and memory shape action and identity whilst also declaring attention to the themes of grief, self-deception and revenge. The labyrinth of Memento is rich and full of memorable scenes, take for example the opening credits sequence; a hand holds a Polaroid photo of a bloodied dead man lying face down on concrete. The photo slowly ‘undevelops’ before our eyes – indicating that the scene is unfolding in reverse. 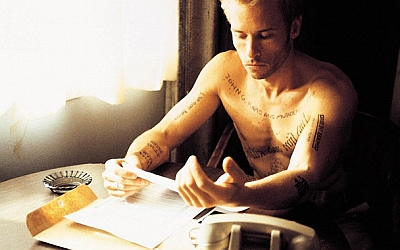 Credit also lies in the performances of an immensely talented cast. Guy Pearce is superb as our unreliable narrator and protagonist, Leonard Shelby, giving an astoundingly tight and convincing performance. Carrie-Anne Moss (Natalie) and Joe Pantoliano (Teddy) add an extra dimension to Leonard’s quest and Mark Boone Jr. brings a thoroughly enjoyable comic performance as Burt, the motel desk clerk who rents Leonard two rooms on the theory he won’t recall having paid for either one.

Despite its disturbing content, one of the great joys of Nolan’s film is that there are fleeting moments of humour; Leonard’s condition put a fresh, comical twist on elements as basic as a chase scene, who can forget when Leonard is running, but can’t recall whether he’s doing the chasing or is being the one chased?

With Memento Nolan avoided the sophomore slump, and created an endlessly fascinating, wonderfully open-ended picture which further explored some of the themes which arose in his debut effort Following (1998). With Dody Dorn’s highly skilled editing and David Julyan’s unsettling, ominous score, Memento is an amazingly assured film, and one which marked the surfacing of Nolan as an impressive new talent for Hollywood to deal with.