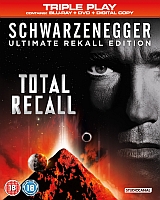 ★★★★☆
With the unwelcome 2012 remake of Total Recall weeks away, StudioCanal have shrewdly decided that now is the time to rerelease the original. Before the glittering, videogame CGI which will populate Len Wiseman’s effort, there was the clunky, analogue, retro-future vision from late 1980s/early 90s staple Paul Verhoeven, a future in which taxis are driven by creepy robotic mannequins, the planets of the solar system are common holiday destinations and an unusual company offers to implant any synthetic memory you might wish, for the right price.

And guiding us through this trashy sci-fi fairytale are some of the biggest names in 80s/90s blockbuster cinema: Sharon Stone as the femme fatale, Michael Ironside and Ronny Cox as the villains, and, naturally, Arnold Schwarzenegger in the starring role. Mr. Universe leads perhaps the most quintessential 80s cast ever, and he is on fine form – perhaps his best role outside the Terminator films. His unique screen presence and liberal take on the art of acting is worth the DVD price alone (as is the now infamous DVD commentary, where you can hear Arnie drop such wondrous gems as “Dis is me on da screen here”). 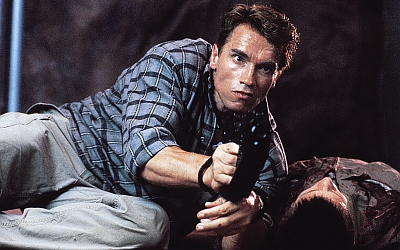 Based on Philip K. Dick’s short story We Can Remember It For You Wholesale, it is not as thoughtful or considered as Blade Runner (1982), the first film to be based on the sci-fi author’s stories. Verhoeven was never a light-touch filmmaker and much of Total Recall is about as subtle as a lump of space rock – be it Rob Bottin’s indelibly mad mutant prosthetics, the garish lipstick-red Mars miniatures, or the frequent, bloody, noisy violence. But beneath such bombastically indulgent action lies a veneer of surprising philosophical depth.

With Dick’s source text as a starting point, there are some mind-bending moments, including perhaps most memorably the scene in which Quaid is confronted by the sinister Dr. Edgemar, whose outlandish pronouncement that “You’re not here, and neither am I” nimbly challenges the perceptions and preconceptions of both Arnie and the audience, to an extent rarely found in popcorn cinema.

Like much of the oeuvre of Schwarzenegger and Verhoeven, it’s difficult not to sometimes lapse beyond your disbelief suspension when watching today – will our future really contain such big hair and poor fashion sense, etc. But as long as you can accept some of retrospectively ludicrous elements as kitsch appeal, then you can accept Total Recall v1.0 as a stone-cold cult classic, a movie to riotously and robustly entertain whilst also provide smidges of philosophical morsels to chew on.

Win a copy of Total Recall on Triple Play with our latest competition. Follow this link to enter.