This week’s Second Sight rerelease of Carol Reed’s high flying epic Trapeze (1956) is a welcome reminder of the domineering screen presence of Burt Lancaster and the Technicolor epics that dominated the box office throughout the 1950s. Destined to be confused and compared with Cecil B. DeMille’s The Greatest Show on Earth (1952), Trapeze is arguably the superior picture, with Reed using the circus as a backdrop to a simple love triangle.

Trapeze is a more balanced and less bloated affair than DeMille’s film, whilst the pairing of Reed and his The Third Man (1949) cinematographer Robert Krasker provides that perfect blend of dramatic tension and visual flair. Lancaster plays Mike Ribble, a famous and respected trapeze artist who injuries himself whilst trying to achieve the fabled ‘triple’ manoeuvre. 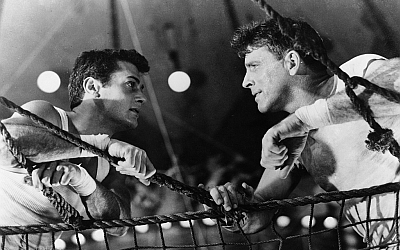 Lame and embittered, Mike turns to drink, but when young upstart Tino Orsini (Tony Curtis) asks Ribble to train him, he decides to form a new partnership with Orsini, using the young man’s talents as a vehicle to resurrect his fading career. Also in the mix is Lola (Gina Lollobrigida), an ambitious solo rope act who will do whatever it takes to muscle in on the success of Ribble and Orsini.

Burt is on top form and being a former-circus performer himself, he seems to be relishing the role. The Svengali/young pretender dynamic with Curtis works so well it’s little wonder that Alexander Mackendrick chose to reunite the pair a year later in the rarely seen but exceptional The Sweet Smell of Success (1957). In fact, it’s this relationship which many critics consider to be the biggest positive and the biggest negative of Trapeze, claiming the central cinematic ménage à trois lacks the required sexual tension as Lancaster and Curtis seem far more attracted to each other than to Lollobrigida.

There are homoerotic undertones to be read, but this increasing trend of reinterpreting Lancaster’s films due to revelations of his bi-sexuality that appeared after his death have become tiresome. The biggest disappointment is that Trapeze has not been remastered for its DVD rerelease, and although faded colour and scratched film has its charms, only a restoration to its true, original Technicolor glory would have done Reed and Krasker’s visuals justice.