After superseding a failed attempt at getting Sam Raimi’s Spider-Man 4 off the ground (with both Raimi and Maguire unwilling to commit to Columbia’s relentless production schedule following the critical mauling of 2007 misfire Spider-Man 3), Marc Webb’s 2012 series reboot The Amazing Spider-Man swings into cinemas promising a completely new re-imaging of the webslinger’s origin story. What we get instead is a likeable rehash, superior in parts, but inferior in equal measure to Raimi’s franchise opener.

British rising star Andrew Garfield plays the dual role of geeky high school boffin Peter Parker and everyone’s favourite neighbourhood wall-crawler. After being abandoned by his scientist parents as a young boy, Parker is raised by his kindly Uncle Ben (Martin Sheen) and Aunt May (Sally Field), developing into a gifted intellectual with little or no social skills – yet still manages to catch the eye of the school’s blonde bombshell Gwen Stacy (Emma Stone). 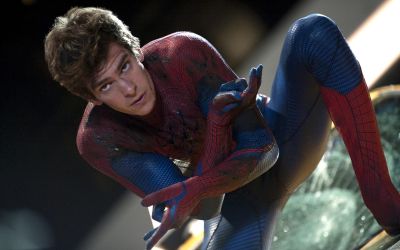 After running into a web of mutated spider in the laboratories of pioneering, ‘south-pawed’ cross-species geneticist (and former friend of his AWOL parents) Dr. Kurt Connors, Parker is transformed into a lighting quick, exceedingly supple New York crime-fighter, complete with customary mask, red and blue Lycra suit and – in keeping with the original comics – mechanical web-shooters. However, the angsty teen soon meets his match in another new super-species – a 15-foot tall human/lizard hybrid that formerly went by the name of Connors.

The predictable, yet somewhat underwhelming decision to install Connors’ reptilian alter-ego The Lizard as the reboot’s opening antagonist is responsible for much of the film’s undoing. Welshman Rhys Ifans does the best he can with a flimsy role, which sadly features some even flimsier creature design – anyone who has seen the de-evolving antics of the god-awful 1993 Super Mario Bros. movie will be right at home. This is hardly helped by some strangely uninspiring special effects sequences (the first-person perspective so berated in the teasers makes an unwelcome appearance here and there), leaving the action set pieces with little heft or brevity.

On the plus side, 500 Days of Summer (2008) director Webb has done an admirable job of drawing out an engaging teen romance from Spidey’s origin story. Garfield and Stone are both perfectly cast as the web-crossed lovers, with the former excelling as the lovable bookworm defying all the odds. Sheen Snr., despite being notably absent from mainstream screens in recent years, gives a pleasing performance as Peter’s doting tutor, whilst Denis Leary’s turn as Gwen’s police captain father threatens to steal the show on more than one occasion.

The question of just why audiences need (or want) a rebooted 3D origin story for a film franchise only a few year’s cold remains to be convincingly answered. Webb manages to nail the human aspect of the NYC teen superhero’s story – arguably far better than Raimi – but fails to deliver the same types of visual awe as its 2002 opposite number. Marvel fans may well have their spider sense tingled by this latest comic-book conversion (Stan Lee even makes his customary cameo as a school librarian), but there is little to suggest that The Amazing Spider-Man can go toe-to-toe with this summer’s other costumed heavyweights Avengers Assemble and The Dark Knight Rises.