British director Peter Strickland follows up his acclaimed debut feature Katalin Varga (2009) with the eerie and aurally-disturbing Berberian Sound Studio (2012), a tale that blurs the lines of reality, set within a sleazy Italian post-production studio in the 1970s. Toby Jones plays Dorking-born protagonist Gilderoy, an English sound mixer who unwittingly departs from his Surrey home to take up a role as a sound engineer on a new Italian giallo feature, ‘The Equestrian Vortex’.

The typical Englishman abroad, Gilderoy struggles to adjust to his new environment of mood-swinging actresses, controlling producers and standoffish receptionists, only ever happy when he is at his work, creating sounds by smashing or hacking up fruit. An atmosphere of exploitation eventually starts to weigh on Gilderoy, as the continual horrors he has to witness in the feature, as well as his hostile surroundings, take their toll on his slender grip of reality. 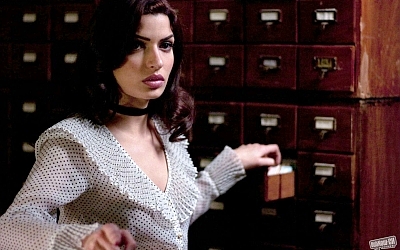 At one point in Berberian Sound Studio, the fictional Italian director of ‘The Equestrian Vortex’ informs Gilderoy: “This isn’t a horror film – this is a Santini film.” This phrase could equally apply to Strickland’s latest work which, whilst disturbing, is far more than a piece of genre cinema. Blood and guts are nowhere to be seen, nor slasher movie tactics or any of the usual tropes a moviegoer might expect from a horror. Strickland has made a films-within-a-film that happens to be set in the world of Italian giallo, showing one man’s descent into his personal nightmares and fears.

Strickland’s approach is subtle and intelligent as he submerges us in the world of the Foley in a pre-digital age. As an audience, we continually see, and more importantly hear, the whirl and clack of Gilderoy’s beloved sound equipment as actors and actresses come in and out, recording blood curdling screams or horrific effects. Jones perfectly captures Gilderoy’s character with his quaint British mannerisms and reserved personality, juxtaposed against the machismo of his Italian colleagues, a factor that provides the much-needed comical light relief in this intense and surreal psychological thriller. What’s more, sound has rarely been explored in a more intelligent and horrific manner in the modern era, made all the more impressive by the soundtrack provided by James Cargill of Broadcast.

Many great horrors hinge upon the idea that what we don’t see can more scary than what we do. Berberian Sound Studio, whilst using this tactic, takes it one step further through its complex use of sound – here, it’s as much about what we don’t quite hear as what we do. Strickland has created a sublime piece of cinema that is intelligent, comic and one of the most profoundly disturbing films to be seen in recent years.