In very much the same vein as Ben Wheatley’s Kill List (2011), writer/director Sean Hogan’s The Devil’s Business (2011) will scare you by inference as much as by what you actually see. Hitman Pinner (Billy Clarke) and his new sidekick Cully (Jack Gordon) are sent by gangland boss Bruno (Harry Miller) to finish some business with his old associate Kist (Jonathan Hansler). Breaking into his secluded house, the men settle down in wait of Kist’s return.

Passing the time, Pinner tells Cully about his past and the disturbing tale of an inexplicable incident which took place many years before in one of Bruno’s clubs. Shaken to the core by Pinner’s story, Cully is ready to flee the scene when Kist suddenly returns earlier than expected. Killing Kist, the men prepare to leave, believing their job has been completed successfully. Unfortunately, it transpires that Bruno hasn’t exactly been truthful about just who their victim was – which ends up costing Pinner and Cully very dearly indeed. 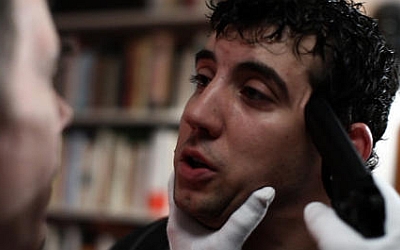 Subtlety is conspicuous by its absence in most modern horrors. In an age where nothing is left to the imagination, much of what is churned out under the auspices of ‘fright’ films suffers from the misconception that full in-your-face viscerality is what audiences truly want. How refreshing then when something like The Devil’s Business appears – a film infused with subtle shocks and old-school horror, which uses stealthy inference rather than blatant, crass visuals.

The film’s ‘less is more’ mantra makes good use of a small cast and minimum sets, along with a surprisingly short 75 minute running time, resulting in a taught occult based chiller. The cutting to the bone of these basic components puts the focus strongly on the characters and plot, allowing the viewer to find out about the main protagonists. The result is that you actually feeling something for those depicted, particularly fresh recruit Cully, infused with an air of innocence by up-and-coming actor Gordon. The house where the whole nasty proceedings take place is, like Kist and his dubious pastimes, is perpetually cast in atmospheric shadow which only adds to the film’s overall air of unease.

Though the final denouement lacks the same type of sharpness shown previously, The Devil’s Business ultimately works extremely well due to its slickness and the fact that, unlike the unfortunate Pinner and Cully, that it’s not a horror movie which outstays its welcome.