The found footage format is beginning to feel more than a little tired these days, no more so than in Sid Bennett’s genre mash-up The Dinosaur Project (2012). Here we follow the apparent endeavours of the British Cryptozoological Society as they embark on an expedition into the dark heart of the Congo in search of an extinct plesiosaur. Seasoned explorer Jonathan Marchant (Richard Dillane) leads the team of intrepid explorers, only to discover that his teenage son Luke (Matt Kane) has snuck along for the ride.

Opening on a shot of a rucksack floating down the Congo River, a rather unconvincing level of menace is quickly established. Essentially, Bennett’s film is a mesh of Steven Spielberg’s Jurassic Park (1995) and Sir Arthur Conan Doyle’s The Lost World, which has itself received multiple TV and movie adaptations over the years. There are also hints of Edgar Rice Burroughs’ The Land That Time Forgot, yet unfortunately The Dinosaur Project lacks the style and panache of any of the aforementioned fiction. It may adopt their narrative devices and plots, but it employs far too many tired and clichéd devices to generate interest. 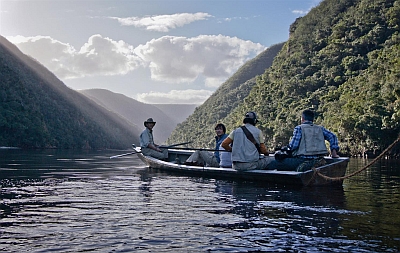 Perhaps the greatest failing of The Dinosaur Project is in opting to set the story in the modern day, leading to a distracting preoccupation with technology and showing how all this found footage could have been created. So concerned is Bennett with exposition surrounding hard drives and digital cameras that he forgets to concentrate on developing emotional interest in characters or tell us why these characters are on this expedition. The weak central father/son relationship lacks much-needed bite and authenticity, whilst a badly-placed revenge-cum-horror story fails to register.

One plus point comes in the form of the sporadic CGI creature effects, handled well considering the budget, with some interesting shots exploiting the found footage camerawork. There’s also an initially odd subplot thrown into the mix which sees Luke befriend a baby dinosaur, which somehow works surprisingly well enough in this preposterous tale.

Ultimately though, there isn’t a great deal to be enjoyed in The Dinosaur Project, even on an ironic level. Yes, it did well on its budget for effects, but it is too aware of itself to be entertaining. Even the much-flawed it’s-so-bad-it’s-good argument can’t save Bennett’s dino-snore debut from sinking away into the fossil record.