US comedy duo Tim Heidecker and Eric Wareheim bring their unusual (and quite frankly bizarre) style of humour to the big screen with Tim and Eric’s Billion Dollar Movie (2012) – a film more likely to anger than entertain. Having been loaned $1 billion to make a film, Tim and Eric turn in a six-minute travesty to their financiers. Unhappy with their attempt, the executives demand to be reimbursed. Finding themselves broke and at a complete loss, the duo decide to accept an unlikely offer from a shady, Top Gun-obsessed figure.

For a film as absurd and exhausting as Tim and Eric’s Billion Dollar Movie, the narrative is surprisingly sound, with a clear structure and through-line that stands as one of the films limited merits. Unfortunately, it’s what’s added on top that’s the problem, specifically the increasingly ridiculous and infuriatingly unfunny gags that hit one after the other and overstay their welcome by miles. 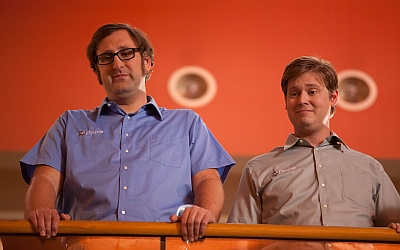 This tireless, never-ending approach results in an overwhelming sense of unease as viewers are subjected to the duo’s various antics, their run-ins with, believe it or not, more preposterous characters than their own and sub plots that come and go intermittently (Tim’s questionable ‘adoption’ of a small child and a runaway wolf are two that spring to mind). Many, if not all, of these gags crash and burn upon arrival, but they keep on coming, with no end in sight.

It’s an experience that’s not only tiring to those forced to endure its slim, yet equally stretched out running time and assortment of ill-conceived characters played by well-known actors as a favour (Will Ferrell and Zach Galifianakis both make unnecessary cameos), but also one that feels almost entirely pointless, if only warranted by the extremely restricted audience and studios potential to cash-in on a seemingly lucrative.

What needs to be understood is that an amalgamation of deranged characters, traumatic humour and attempted Flight of the Conchords-style musical interludes does not make for a enjoyable, indispensable or rewarding cinematic experience. Tim and Eric’s Billion Dollar Movie is more-or-less abhorrent swill; vapid, painful and moronic in the way it treats its audience.