Surveillance (2008) director Jennifer Lynch returns to Film4 FrightFest screens this weekend with serial killer horror Chained (2012), which stars old-hand Vincent D’Onofrio and Eamon Farren. The film revolves around Bob (D’Onofrio), a taxi-driving psychopath who captures a young boy (Evan Bird) after murdering and raping his mother. Once chained up in Bob’s remote bungalow, the boy is enslaved and descends into a mundane existence of endless cooking and cleaning.

Jumping forward in time, the abducted boy (renamed ‘Rabbit’) has grown up to become a broken and cowering young man (Farren). Totally indoctrinated by his maniacal captor, he lives in continual fear, responding to the whims of his cruel master who decides that he must now learn the tricks of his trade – or die. Chained’s opening scene is shocking and powerful, with the young Rabbit staring on in utter fear as Bob commits this heinous central act. Yet as evocative as this intro is, sadly it’s the last truly enjoyable moment of an extremely clichéd horror. 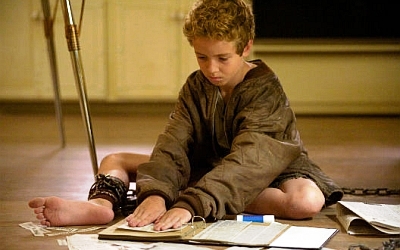 Lynch’s central characters are all significantly underdeveloped and uninteresting to watch, due mainly to the director’s reliance on much over-used devices to justify actions and motives. D’Onofrio struggles to convey himself as anything other than a bumbling, overly-aggressive sicko, whose only justification for exclusively killing women is that they are all ‘sluts and whores’.

This leads on to the next problem; each of Bob’s female victims are nothing more than screaming faceless non-entities of characters. This treatment of women in certain types of horror cinema – in which Chained finds itself place – is swiftly becoming not only tiresome but incredibly dated. With the exception of Rabbit’s late mother, who at least shows some signs of strength, all the featured women are either walk-on roles or dizzy bimbos. Lynch may have wanted to focus purely on the central protagonists; however this means that there is an even greater reliance on the strength of the performances and writing of the two leads, something that both the actors and the writing are unable to live up to.

Disappointingly, Lynch’s deeply exploitative Chained is a vacuous endeavour that attempts to redeem itself in its final throes, throwing at its audience a cheap twist that feels severely bolted-on out of pure desperation. You will have probably (nay, certainly) seen just this type of depraved, brainless movie many times before – and Lynch’s attempt at a serial killer horror is neither new, nor interesting.