To misquote the crows from Disney’s 1941 classic Dumbo; “I’ve seen a horse ﬂy, I’ve seen a dragon ﬂy, I’ve seen a house ﬂy, but I ain’t never seen sushi ﬂy.” Many of the good folks who attended this year’s Film4 FrightFest, however, will have no need of such a statement if they managed to sample Noboru Iguchi’s rice-based morsel Dead Sushi (2012).

The premise of this blood-soaked Japanese horror-comedy sees Keiko, the daughter of a master sushi chef, run away from home due to her father’s disappointment at how feminine she has grown up to be. Distraught and alone, she takes a job in a hotel resort famous for its sushi cooking, which is subsequently visited by the executives of a distinguished pharmaceutical company. Little do they know that there’s a mysterious vagrant wandering the area with a dead (and more importantly deadly) cephalopod; and then all Hell breaks loose. 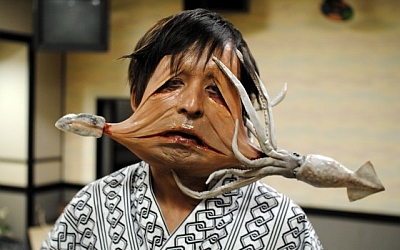 There’s a memorable scene in Barry Levinson’s Young Sherlock Holmes (1985) in which Watson is beset by an army of evil stop-motion pastries. Remember it? Well, Dead Sushi is like that, but with levitating, fanged California rolls, exaggerated sound effects and lashings of CGI blood. This is exactly the kind of ﬁlm that you can’t really approach with any kind of sobriety. The plot is utterly incomprehensible, the cartoonish performances would drive most people up the wall and the lack of budget means that the effects don’t really help the situation.

Dead Sushi’s weirdness, however, does often work to the ﬁlm’s advantage. Where many jokes fall ﬂat, the left-ﬁeld plot twists, living dead foodstuff and a couple of comedic ﬁght scenes provide laughs enough to maintain interest. The lack of investment in plot and/or any character development do mean that silliness is its sole attribute. Even sushi sex (yes, really) and a giant sushi roll battleship commanded by Admiral Ackbar’s dastardly twin brother can’t ultimately save it.

While Iguchi’s Dead Sushi is perhaps not worth seeking out especially, it’s arguably diverting enough for 90 minutes, with the odd chuckle to be had here and there. As the film’s protagonist Keiko herself states, “Any sushi that sings that good can’t be all bad.”