There’s little pretension to be found in Martjin Smits and Erwin Ven Den Eshof’s ‘Dutch of the Dead’ outing Kill Zombie! (Zombibi, 2012), which receives its UK premiere at this year’s Film4 FrightFest. This amateurish horror comedy ostensibly does what it sets out to do – kill zombies – in large numbers and by a variety of fairly inventive means. Sadly, the end result pails in comparison to recent genre highlights such as Shaun and Juan of the Dead, and seems (rightly) destined to fade into obscurity amidst a packed festival programme.

After the population of Amsterdam-West are zombified by the ominous green sludge oozing from a downed Russian satellite, a rag-tag band of misfits join forces to fight off the flesh-eater threat. The group’s unelected leader is ex-office worker Nolan (Uriah Arnhem), on a mission to rescue his attractive ex-colleague from his former place of work – the very building that the smouldering metal harbinger has crashed into. With the undead horde amassing around this zombie beacon, Nolan and co are forced to do bloody battle with the assembled army of shuffling stiffs. 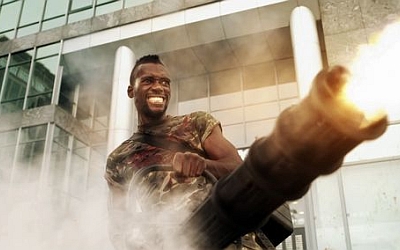 Those familiar with iconic rom-zom-com Shaun of the Dead will easily spot comparable elements between Wright’s zinger and this Dutch imposter. Nolan spends the majority of the film running across a post-apocalyptic city, kitted out in a bloodied shirt and tie, desperately trying to save his ‘girlfriend’ from the gnashing jaws of the living dead. What little deviation there is from Shaun is entirely unnecessary, and even a hastily-placed video game-emulating sequence smacks of Wright’s polarising 2010 offering Scott Pilgrim vs. The Word.

Originality is clearly thin on the ground in Kill Zombie! (as it has been within the zombie genre as a whole for the couple of few decades), but there’s just enough humour and gore sprinkled by Smits and Eshof throughout to narrowly avoid complete calamity. This fact is perhaps best illustrated in a scene involving a domesticated ghoul, channelling Sherman Howard’s endearing Bub from Romero’s Day of the Dead (1985). In addition, the promotion of minority characters to the fore is a welcome touch, with Alfred Molina-lookalike Yahya Gaier enjoyable for the most past as Nolan’s buffoonish older brother Aziz.

Sadly, such highlights are few and far between. Kill Zombie’s surprising lack of ingenuity and vacuous narrative leave little to savour, let alone chew upon. Limbs inevitably fly, brains are inevitably devoured and a crazed Russian general even drops by for a short – if redundant – cameo, but at the end of a mercifully short runtime, memories of this low budget Dutch ditty begin to fade almost instantaneously.