Cult actor Michael Biehn makes his directorial debut with The Victim (2011), screening at this year’s Film4 FrightFest. This weak attempt at grindhouse opens with two local cops taking two strippers into the woods for a ‘private party’. One of the crooked cops gets carried away and ends up murdering one of the strippers as the other, Mary (Blanc), looks on in terror. Fleeing from the scene of the crime she stumbles across Kyle (Biehn), a recluse who – after hearing Mary’s – story decides to take the law into his own hands. 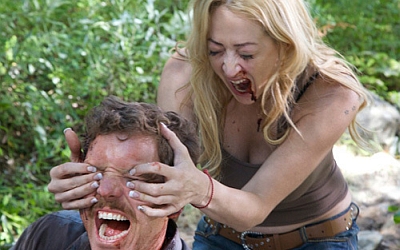 Biehn, along with his fellow cast members, seems to be of the if-I-shout-really-loudly-I-am-conveying-emotion school of acting that makes for incredibly dull viewing. None of this is helped by the fact Biehn’s character is called Kyle (from The Terminator yeah?), an obvious wink to the audience as to who this dated actor is. Sadly it only serves to remind audiences of a certain generation that Biehn hasn’t been seen on the big screen for a long time – and after watching The Victim it is easy to see why.

During a torture scene, or even in the chases through the woods, there is never any sense of peril, undeniably due to the fact that even the most forgiving of audiences would struggle to invest in these sloppily written characters. For a film that runs for under 90 minutes, it also drags a great deal. There are moments where it appears Biehn hasn’t watched a film that was made after the 1980s to inform him of how things have changed. Out of charity, some may suggest that Biehn intends us to view the film as an ironic feature, but the directing and writing just isn’t clever enough for such a claim to be made.

It seems almost too easy to damn a film such as The Victim, but it truly lacks any redeeming features. Perhaps, at a pinch, there is a small amount to be taken from the mild amusement of thinking, “Oh I remember Biehn, I didn’t realise he was still working.” But this is rapidly replaced by pity for this out-of-work actor who evidently thinks anyone can make a film.