The 69th Venice Film Festival got under-way with its first foray into 3D, diving into Kimble Rendall’s Ozploitation movie Bait (2012). The story opens with our surf-rescue hero Josh (Xavier Samuel) a little worse for wear after his engagement party. Josh’s future brother-in-law Rory (Richard Brancatisano) heads out to check the buoy in Josh’s stead but this poor boy is soon snapped up by a killer shark before the horrified gaze of Josh and his fiancée Tina (Sharni Vinson).

Fast-forward a year and we find lovelorn Rory working in a supermarket – the aptly-named Oceania Mart – his best friend eaten and his girlfriend gone. There’s all kinds of stuff going on both in the supermarket’s underground car park (a robbery being organised and a dozy couple getting some bargain basement-loving) and in the store itself, with naughty shoplifter Jaime being arrested by her dad, her boyfriend Ryan being sacked by the nasty manager and the robbers finally in action. To top it all, a tsunami hits town and when it arrives, in gush two great white sharks to prey on the supermarket survivors. 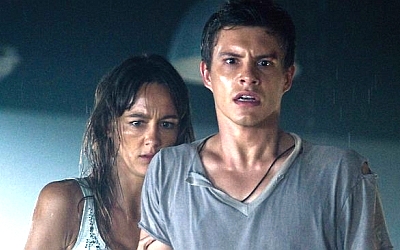 From here-on in, we dip our feet into Bait’s rather murky waters. What could have been a fun, over-the-top gore-fest becomes a serious movie about love, forgiving and sacrifice. Alas, the script – what there is of it – and the actors just can’t pull it off, and more to the point, the audience doesn’t want them to. They’ve been placed there to provide comic relief but have been beaten to the punch by the gang upstairs, who garner more laughs from the audience with their dramatic pauses, meaningful glances and dreadful lines. That’s not to mention a Singaporean hero dressed for underwater combat in an ad-hoc deep-sea suit made of shelving and a helmet fashioned from a shopping basket.

Alas, much of Bait’s 3D is wasted on jellyfish and swirls of blood when we are hungry for shark-on-human action. Having seen what can be achieved with 3D, Ridley Scott’s recent Prometheus (2012) being a good example, the audience wants to hold their collective breath and feel the water lapping at their feet. Rendall’s film barely gets a gasp from the viewers.

With Jaws (1975) recently enjoying a renaissance at the cinema, Rendall was always going to risk comparison with that movie. But while Bait 3D is nowhere near as classy as Spielberg’s classic, it’s also nowhere near as scary as Deep Blue Sea (1999) or half as funny as the Shark Pool spoof trailer. Stay on the beach – it clearly isn’t safe to enter this supermarket.