The 2011 Sundance Film Festival saw the premiere of Nicholas McCarthy’s fourth short film. One year later, the director returns with his debut feature, a reworking of that very same short in the form of The Pact (2012). Adopting a familiar haunted house-style setup, McCarthy looks to make the film feel a bit more modern by imbuing it with a somewhat indie sensibility, allowing his ghost to interact with modern technology and a neat third act twist. Sadly, the thing that the film lacks is any real scares.

The plot follows the (mis)fortunes of Annie (Caity Lotz), who arrives at the home of her recently deceased mother expecting to see her sister, Nichole (Agnes Bruckner). Although her phone is there, oddly lying in a closet, Nichole is nowhere to be found and before long Annie begins to experience strange goings-on in the house. When the supernatural seems to arrive for real and her cousin also disappears whilst in the house, Annie goes to the police who, naturally, are sceptical. Detective Bill Creek (Casper Van Dien) agrees to help but its Annie who suddenly finds herself being contacted from beyond the grave and discovers a hidden room in the house in which she grew up. 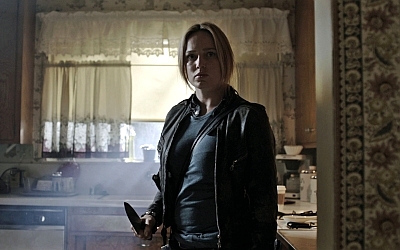 The stretching of the short into a feature length plot has not seen the director filling in a lot of the back story so it is fairly light in this area. Eschewing lengthy exposition, Annie is a withdrawn character that spends much of her time solo, meaning there are restricted opportunities for the history of the house to be discovered and articulated. This is refreshing but does leave The Pact feeling slightly muddled and questions remain unanswered.

There are nice touches throughout, including the use of modern technology, with the ghost appearing on Skype, Google Maps and the display screen on a camera. This is contrasted with the traditional plot and the eerie silence of numerous trips around the empty building. Unfortunately, whilst it does manage to feel disconcerting, The Pact never quite ramps things up to actually scare and pales in comparison to the recent ghost inhabitation in The Innkeepers (2011).

The Pact does, however, feature a clever shift in focus in its final act which almost switches the genre entirely and not only adds an additional plot element but alters the kind of tension that the audience is feeling which will perhaps please some viewers. It doesn’t quite make the film, but is another contributing factor to an intriguing debut from McCarthy.