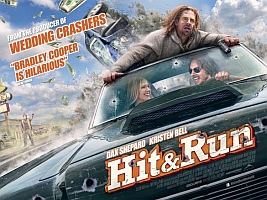 Hit and Run (2012) is one of the many films spawned under the influence of broad, masculine-driven US comedies like 2009’s The Hangover, where stereotypes are in abundance and bad taste is essential. Unfortunately for writer, co-director and lead actor Dax Shepard, his attempt of writing a comedic script is an absolute car crash, as he substitutes genuine comedy with cheap, offensive gags. Shepard plays ex-con Charles Bronson, formerly known as Yul Perrkins, who was given the new (in no way inconspicuous) identity as part of the Witness Protection Programme.

Bronson and girlfriend Annie (Kristen Bell) live in a sleepy town where opportunities are few and far between. So when Annie is offered a teaching position across the country at UCLA, her reasons to leave seem obvious. What Charlie hadn’t banked on was the extent of Annie’s ex-boyfriend Gil’s (Michael Rosenbaum) obsession with her. With Charlie’s nemesis Alex (Bradley Cooper) and his lackeys also out for blood, Gil leads the pursuit across America as Charlie and Annie are wrapped up in a series of mediocre car chases involving Shepard’s own cars. 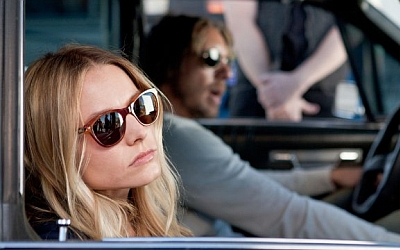 Although Hit and Run’s plot is relatively straight-forward, they still manage to drill several plot holes into this messily-written film, with clumsy plot exposition that is clearly for the audience’s benefit rather than being natural-sounding dialogue. Shepard and Bell handle the script most competently, as their chemistry as a real-life couple comes through in the acting. Rosenbaum gives a muddled performance while Tom Arnold doesn’t know what to do with the homophobic content assigned to his character of gay cop Randy.

The biggest crime in this supposed comedy were the jokes themselves. The inclusion and tone of the various rape jokes involved are totally misjudged. For example, a colleague of Annie’s (Kristin Chenoweth) reminisces of how she was gang-raped, had an abortion then reassures Annie “I got what I deserved”. There’s also a conversation in which Alex admits he was “butt-fucked” in prison and Charlie lists various ethnicities until they decide it would be most funny if Alex’s rapist was Filipino. Co-director David Palmer clearly shares the same juvenile sense of humour as Shepard and the ‘joke’ was rinsed for three excruciating minutes.

Throw-away comedies can often make up for its lack of stuffing with light-heartedness and likeable characters, but Hit and Run has neither, opting instead to focus on distinctly unpleasant people whose attempt at witty banter leaves a very bad taste. Let’s hope Shepard sticks to acting and leaves screenwriting to people more concerned with telling an engaging story.