With a growing Hollywood resume that now includes Roland Emmerich’s Godzilla (1998), Scorsese’s The Departed (2006) and R-Patz flick Remember Me (2010) (to name but three), audiences may well wonder just why it is that they hadn’t heard of the not-so-elusive Radioman in advance of Mary Kerr’s well-intentioned doc. Friend to the stars and the human equivalent of the Wilhelm scream, our eccentric, formerly-homeless subject is endlessly watchable as he scours the film sets of New York for extra work. Instead, it’s the numerous celebrity cameos that leave a bitter taste in the mouth.

An awkward child born to a caring mother and un-supportive (plus violent) father, the artist known as ‘Radioman’ – famed for the boombox he wears around his neck – spent much of his adult life leading a hand-in-mouth existence on the streets of NYC. In 1990, after chancing across the set of Bruce Willis film Bonfire of the Vanities, Radioman was offered the role of a walk-on tramp – and has never looked back. Now recognised by the Tom Hanks’, Johnny Depps and Meryl Streeps of the Hollywood machine, Radioman has become a totemic ‘lucky charm’ for New York shoots, with a string of box office hits under his worn belt. 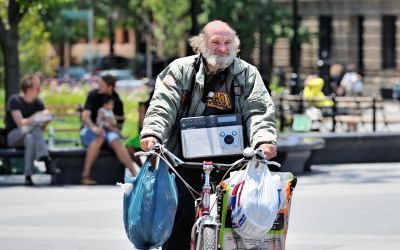 Kerr’s attempts to tread carefully around Radioman’s patently traumatic past are often hit-and-miss. Our subject clearly still suffers the ticks and quirks picked up from a life on the streets, and thrusting a camera into his face during sporadic moments of frustration and despair is perhaps bordering on the exploitative. However, regardless of the occasional ethical issue raised, there seems little doubt that Radioman’s very existence is fuelled by its saviour – the movies.

Far more exploitative of our protagonist (and Kerr’s camera) is the roll-call of Hollywood A-listers whose gushing testimonies – more often that not – feel deeply patronising. It’s hard to shake the nagging sense that this is all some sort of warped PR exercise orchestrated by bigwig talent agents, intent on showing their clients’ caring, human side. Equally unsettling are the packs of autograph hounds that Radioman runs into in LA, hurling abuse at the idols they once worshipped (case in point: Ben Stiller).

Kerr’s Radioman (2012) has undoubtedly been made for all of the right reasons, and there are moments in the film that are genuinely touching (he seems strangely addicted to the Chiller channel, despite its B-movie production values. However, Kerr panders far too much to its celeb interlopers, massaging egos rather than painting a complete portrait of one of New York’s more interesting inhabitants.