Making the effort to think of something that Seth MacFarlane (the much-loved creator of hit American adult animations Family Guy, American Dad and The Cleveland Show) and his brand of outlandish animated comedy is yet to poke fun at is like trying to trawl through episodes of Family Guy to find one where Peter doesn’t invoke some sort of outlandish, contrived flashback. But, whilst MacFarlane’s latest endeavour, 2012 box office smash Ted, is rife with all the same hilarious and risqué political incorrectness that, to date at least, MacFarlane has built a career upon, there is thankfully a little more at the film’s core.

Written, directed and produced by MacFarlane himself, Ted follows the story of John Bennett (Mark Wahlberg), a grown man whose lonely childhood wish brought his cherished teddy bear, Ted, to life. After instant mega-stardom and fame for Ted, the fairytale is very much over and the reality of living life with a now cynical and crude, Ted is starting to take its toll on Bennett and his gorgeous partner of four years, Lori (Family Guy voice artist Mila Kunis). 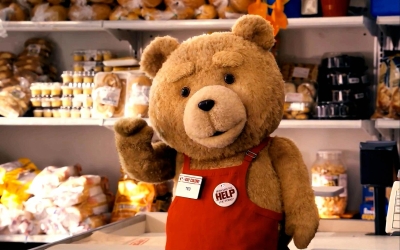 Whilst Ted, with MacFarlane’s backing, could have easily paved its way as a merely ‘funny’ film about a badly behaved teddy bear, it makes genuine efforts to be a little more than just an exercise in tomfoolery and madcap escapades by centring on a unique friendship between a protagonist and his childhood totem. In many ways, MacFarlane has created a true ‘rites de passage’ movie, charting the path, albeit bizarrely, from childhood to growing up and becoming a ‘responsible’ adult. At times, the film’s sentiment is quite resonant, regardless of the fact that it is mostly delivered through foolish endeavours, working nicely to counterbalance Ted’s ludicrous premise and place it somehow within the realms of plausibility.

Comprised of talking dogs, transvestite aliens, outspoken drunks, elderly paedophiles and parodied right-wing republicans – to name but a few – MacFarlane’s creations often provide a skewered portrayal of contemporary American society and an antithesis to the way America perceives itself, whilst, somehow always managing to reassert core values of family and friendship. Through Ted – basically a tale of a drunken and debauched teddy bear, with a love for hookers and substance abuse – MacFarlane, amidst all the film’s chaos, manages to impart yet another life lesson in his typically roundabout and preposterous fashion.

Ted is outrageous from the off and will certainly keep Family Guy and American Dad fans satisfied. Yet it is MacFarlane’s growing ability to add sentiment to the absurd, bringing tales of love to the ridiculous, and to tap into the social consciousness that make his growing body of work important to this generation and placing it on par with the likes of Matt Groening’s The Simpsons. But, whilst Ted doesn’t quite reach such heights alone, it, as a part of MacFarlane’s work, is marking the mood of a generation and getting some big laughs along the way.

Win a copy of Seth MacFarlane’s hilarious Ted on Blu-ray with our brand new competition. Follow this link to enter.