Charles Dickens and Christmas go together like holly and ivy, or Nigella Lawson and a festive lunch. With that in mind, the release of British director Mike Newell’s new adaptation of Dickens’ much-loved literary classic, Great Expectations (2012), couldn’t be timelier. Sadly, however, it could have been better. This well-known and frequently adapted piece of Bildungsroman follows the rise of Pip (Toby/Jeremy Irvine). Living in the midst of the marshy planes of the Kentish countryside, Pip’s life is full of the daily torment of being brought up ‘by hand’ by his sister (Sally Hawkins), who overshadows the kindness shown by surrogate father Joe (Jason Flemyng).

Years later, Pip becomes the inheritor of a fortune from a mysterious benefactor, allowing him to live a life of luxury in the foggy streets of London. Now clad in the height of fashion, Pip pursues his childhood love Estella (Holiday Grainger), a stone-hearted woman of great beauty. However, the ghosts of the past lurk around the corner, and the origins of Pip’s newfound wealth reveal a dark secret. Much like Alfonso Cuarón’s 1998 incarnation, Newell – along with screenwriter and author David Nicholls – has attempted to inject a sense of passion and sex into Great Expectations. In essence, this is an endeavour to provide the modernity of Cuarón’s version, whilst still bound up in 19th century corsets. 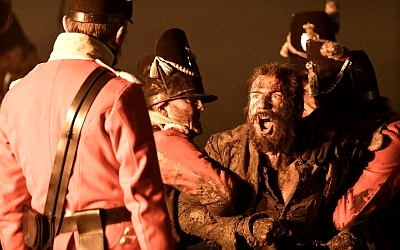 Brought to the forefront this time around is the psychological development of the once-lowly Pip as a product of his abusive upbringing and environment. The result is that Pip’s motivation to be a gentleman is, above all, to escape the horrors of his childhood. But this modern twist on the tale loses the essence of a story that is essentially about love. Pip wants to become a gentleman not simply to escape from his kindly surrogate father Joe or wicked sister, but so he can attain equal social rank to Estella, to whom he hopes to one day be married. Newell’s Great Expectations attempts to make the tale more relevant for today’s audiences – a worthy endeavour – but what we get instead is a perfunctory, at worst flat adaptation.

A host of crowd-drawing names in the casting bill do help to counter such aforementioned issues. Supporting members include Academy Award winner, Ralph Fiennes, who does a comical turn as ex-con Magwitch, peppered with plenty of cockney swagger. The adeptly cast Helena Bonham Carter offers up a suitably spooky, if occasionally squeaky, rendition of the iconic forever-bride-to-be, Miss Havisham. In the end, these are all rather standard performances that at times over egg the pudding of an already rich tale.

The production looks lavish; the costume designs have an elaborate Pater-esque quality with an 80s Adam Ant twist, in a contemporary turn on Victorian garb. These elements work. So do the well-chosen backdrops including the cobweb-laced halls of Satis House (Englefield House, Berkshire), home to the madly melancholic Havisham. Sadly, looks aren’t everything. However interesting in approach, Newell’s Great Expectations lacks the courage of its convictions, leaving us all with a feeling that we would rather return to the reserved, well spoken characters of David Lean’s 1946 production of Dickens’ timeless classic.