Producer Roger Corman’s modus operandi was to take guys who wanted to be the next Godard and get them to make a 90-minute low budget exploitation film, so they could learn their craft and become more disciplined filmmakers. From Martin Scorsese to Francis Ford Coppola, the talents involved in ‘The Roger Corman Film School’ (as James Cameron called it) would go on to start the New Hollywood movement in the 70s. Directed by future genre iconoclast Joe Dante from a screenplay by John Sayles, Piranha (1978) is a delight; a silly B-movie with a smart script and an amusing anti-authoritarian undercurrent. 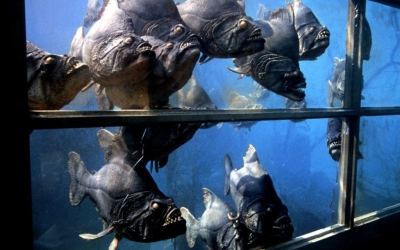 When Maggie McKeown (Heather Menzies) goes to Lost River Lake to look for two missing teenagers, she and curmudgeonly local alcoholic Paul (Bradford Dillman) stumble across an old army testing centre where genetically enhanced piranhas were bred as weapons to be used in Vietnam. After accidentally draining a pool in the centre, the piranhas break out into the river and cause havoc among the locals, including a summer camp for school children and a newly opened water park.

Piranha is a nuts-and-bolts B-movie elevated by a Sayles’ terrifically arch script and Dante’s considered direction. The director overcomes budgetary restrictions by judiciously shooting the piranha attacks underwater in hazy close-ups obscured by blood. This means that, though inevitably dated, the effects do have a rough charm. Indeed, the technical contributions are solid; visual effects artists Phil Tippert and Rob Bottin as well as editor Mark Goldblatt all went on to successful careers in huge blockbusters.

Being a film made by young men in the 70s, it’s no surprise to see just how pronounced Piranha’s anti-establishment credentials are. The army, the government, businessmen and even camp counsellors are portrayed as tyrannical villains. Sayles even sets his sights on contemporary foreign policy, with some cursory criticism of the US’s involvement in Vietnam. “There’ll be other wars” scientist Dr. Mengers (Barbara Steele) says ominously towards the end of the film. All this is weaved in nicely between the obligatory exploitation film staples of gore, nudity and explosions. Piranha, thanks to its lashings of irony and well-executed set-pieces, remains an absolute joy.