Among this year’s gilded list of Oscar nominees, there are surely few peasants – but Emad Burnat is one. The amateur cameraman, who lives largely off the land of his modest Palestinian village, now shares a Best Documentary nomination with Israeli filmmaker Guy Davidi for 5 Broken Cameras (2011), their illuminating first-person account of the ongoing Israel-Palestine territorial dispute. Told from Burnat’s perspective over a five year period, we watch from a unique vantage point as his native village of Bil’in boldly resists the ever-encroaching Israeli settlers and their bullish army enforcers. 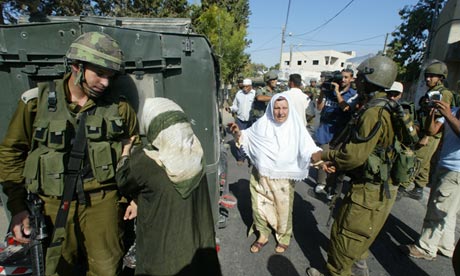 The film is framed through Burnat’s collection of cameras, each of which successively suffer damage at the hands of Israel Defence Force soldiers during Bi’lin’s regular largely non-violent demonstrations. Burnat can chart “an episode of my life” with each camera; as his involvement in the resistance movement becomes greater, so does the danger to his life. Burnat’s broken cameras provide a neat structural composition to the film, but a more intriguing framing device is found in his fourth son, Gibreel. Born on the same day that soldiers first arrive in the village, Burnat’s first camera is originally purchased just as any proud parent might – to document Gibreel’s formative years.

Through his thoughtful narration, Burnat openly worries what it means to be born into an endless cycle of violence and oppression, or what it means when your first words are ‘wall’ and ‘soldiers’. His footage, showing frequent – and sometimes fatal – tussles between both sides, is visceral and raw, yielding deeper context than any fleeting news bulletin could hope for. A voracious documentarian, Burnat trains his lens indiscriminately on the chaotic world around. The five cameras bear witness to some staggering acts of brutality from the IDF, sometimes in defiance of Israeli court decisions. Like the looming settlements, it’s an incremental process of oppression, a slow march of aggression, reaching its zenith when soldiers attempt to evict Burnat for being in a ‘military zone’.

This being such an autobiographical tale, there is no effort to seek any response from the Israeli side, and there will be plenty who take issue with the film’s single-minded approach. But in Bi’lin’s compact example, the conflict seems yawningly lopsided, an eternal battle fought in disproportionate terms: kids with pebbles versus soldiers with semi-automatics. The filmmakers make no explicit political statement in 5 Broken Cameras, but the implicit one is loud, angry, and urgent.