The anthology movie has been a staple of the horror genre for several decades, with its origins creeping back even further to the days of expressionist Germany. Embracing that very same tradition, whilst simultaneously looking to rejuvenate it for the 21st century and tip a nostalgic hat to grimy 1980s ‘video nasty’ cinema, is the aptly-titled V/H/S (2012). Now arriving on DVD and Blu-ray following a brief appearance in UK cinemas, the movie features segments from established filmmakers such as Adam Wingard, David Bruckner, Ti West, Glenn McQuaid, Joe Swanberg, as well as collaborative directing troupe Radio Silence.

Featuring five distinct shorts and a framing story, commonality is created by each film utilising the much more recent – and already tired – horror motif of found footage. As with any such venture,  V/H/S is an uneven affair that unfortunately misses the target more often than it hits, but it does have some novel twists to apply to its chosen sub-genre. The uninspiring frame involves a group of deplorable youths breaking into a house and watching a series of VHS cassettes which reveal the self-contained stories. 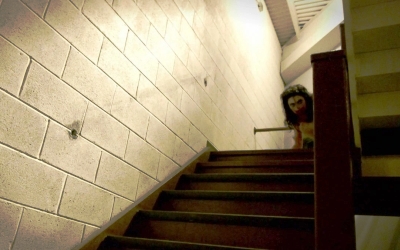 There are positives though. Some of these come through interesting media: the use of a camera inside a pair of glasses, or a Skype conversation, to gather the needed footage. In McQuaid’s entry, although the overall piece lacks much spark, the villainous spirit appears as a glitch image on the digital camera screen. The segments by West and Swanberg prove to be the pick of the bunch. Both provide a little more sense of atmosphere and both have unexpected twists (one works, one doesn’t).

Ultimately a lack of real chills, even from the better sections, means that no matter how much invention might be on show,  V/H/S would always come up short. The filmmakers have tried to do something interesting within the confines of the genre – which is admirable as it is more than most features bother to attempt – but it’s still not enough to put the verve back into it. Although the film industry certainly disagrees, perhaps it’s time to just press ‘stop’ on the found footage sub-genre.