Jen and Sylvia Soska (aka the twin Canadian Soska sisters) made their first collaborative feature, the brilliantly titled Dead Hooker in a Trunk, all the way back in 2009. The sinister siblings marked their long-awaited return to horror cinema last year with the Film4 FrightFest UK premiere of their macabre follow-up American Mary (2012), the ultimate twisted tale set amidst the world of body modification. Now in UK cinemas for a limited run, Katherine Isabelle stars as Mary, a struggling medical student with both a talent and passion for surgery (at one point she’s told by her fellow colleague “You’ll be a great slasher.”).

When funds start to dwindle, Mary becomes rapidly disenchanted with her chosen profession, a situation made worse by her bullying lecturer, Dr. Grant (David Lovgren). However, when she is offered a large sum of cash for a one-off surgery job at the request of a local small-time gangster, Mary finds herself tumbling down the rabbit hole into the bizarre world of body modification. From here-on in, Mary uses her unique set of skills to fulfil the weird and wonderful whims of her ‘freakish’ customers. 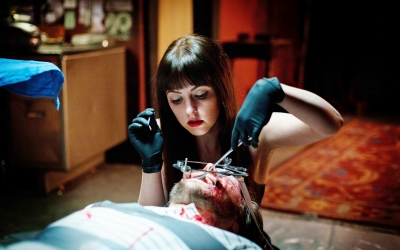 The tone for American Mary is set from the off, as we see our titular heroine honing her surgical skills on a turkey by adding extra sets of legs and wings. Close-ups of needles diving through the skin of the bird are the mildest of horrors we see, as she goes on to surgically swap the arms of a pair of twisted sisters (a delightful cameo involving the directors), implants horns onto a Goth’s forehead and splits a girl’s tongue in two. The horror builds as Mary’s reputation increases for carrying out more and more disturbing operations, earning herself the nickname ‘Bloody Mary’.

Isabelle rightly steals the show courtesy of her smouldering and deranged central performance, remaining charming throughout despite the horrors she ultimately commits. There is something of Lucrezia Borgia about her character; an intelligent, sexy and deadly woman who knows what she wants and observes no boundaries as to how she achieves her goals. Those she ‘works on’ make for equally fascinating and fun characters, including a Betty Boop wannabe and a girl desperate to be an anatomically asexual living Barbie doll.

Underneath all of American Mary’s surgical surrealism and Gothic horror lies an interesting – albeit light – commentary on identity and a witty inversion of sex and fetishism. Importantly, the directing Soska sisters have successfully avoid simply mocking this subculture, whilst maintaining an entertaining, deliciously macabre tone – put simply, good, gory fun.