After the difficulties of making Hisss (2010), an audacious horror filmed in both Hindi and English, erratic director Jennifer Lynch returns to the murky psychological landscapes of Surveillance (2008) with Chained (2012); a chilling exploration of the nature versus nurture argument in the context of how monsters are created. It’s difficult not to admire the film’s conceptual ambition and considered subversion of genre tropes despite being hindered by its brief but puzzling retreats into more conventional territory. Chained opens with Sarah (Julia Ormond) and her 9-year-old son Tim (Evan Bird) being kidnapped by cab driver Bob (Vincent D’Onofrio).

After murdering Sarah, Bob tells the boy that he is now his slave; he will cook and clean for his captor and will be severely punished for any kind of disobedience or attempted escape. The film then jumps ten years, by which time Tim, or ‘Rabbit’ as Bob calls him (now played by Eamon Farren), is still a captive servant and has watched Bob murder dozens of women. After years of being broken down, Bob tells him to prepare himself for his first “taste of a woman”. 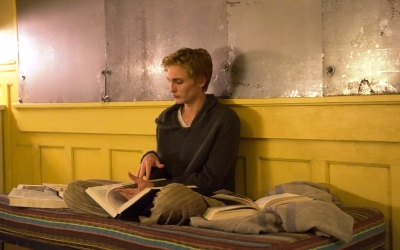 When Lynch was first offered the project, it was a more traditional torture film, but she eschews the stylistic and narrative constraints inherent in that genre and makes a valiant attempt to pull focus from the violence and force the audience to consider why it’s happening. Chained is partly successful in this respect; the dour aesthetics and systematic depravity lend a desolate sense of futility to the horrors on display, prompting the viewer to fill in the psychological blanks. But this intriguing ambiguity is lost in the film’s unnecessary, thankfully infrequent compulsion to explain itself through back-story. It’s akin to a loss of nerve on Lynch’s part – hugely frustrating, as the exposition is brief and could have simply been edited out.

Lynch’s primary focus, and indeed the film’s strongest element, is the question of Rabbit’s complicity in his perpetual captivity. The teenage Rabbit constantly veers between resisting and relenting, and it’s in the tension between these two states that Chained is at its most fascinating and insightful. Farren plays the boy as a blank canvass; a conduit for Bob’s perversity. While a last-minute plot twist seems ill-conceived, it does force the film’s unrelenting nihilism out into the open. It’s more successful in concept than execution perhaps, but the film’s pessimistic view of humanity and genre-bending philosophical foundations keep it interesting.