Although she consciously rejects the notion of recurring themes and imagery found within the linearity of her career, The Claire Denis Collection – which groups together a handful of the French writer-director’s finest works – highlights and explores how she actively imbues her cinema with an autobiographical edge. Dealing with topics stemming from the dichotomy between colonial and post-colonial West Africa, as well as relatable issues found in contemporary France, Denis discards any trace of mainstream cinematic conventions in order to offer audiences a raw and indelible look into the fragility of life, relationships and survival. 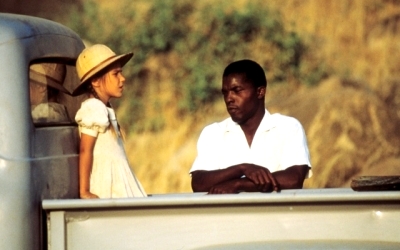 Denis’ first feature, the Palme d’Or-nominated Chocolat (1988), features a common leitmotif that will become a somewhat commonplace feature of her filmmaking: that of the breakdown in projecting past present. Shot on location in West Africa, the film is a study of Denis’ own experiences with racism, projected by a woman in the present contemplating her past as a young girl living in a ruptured colonial outpost in Cameroon. Composed and calculatingly restrained, the film studies racial divides and the oppressiveness of French colonialism, whilst coupling strong performances with a simmering menace.

Nénette et Boni (1996), on the other hand, is an abstract sex comedy of sorts that sees the titular characters battling with looming adulthood, exasperated sexuality and unexpected pregnancy. It may not be as accessible or challenging as her best-known work, but Nénette et Boni depicts a fraught familial relationship still suffering from the complex ripples of separation. Loosely based on Herman Melville’s novella Billy Budd, Beau Travail (1999) is Denis’ sinuous masterpiece, a tapestry of frustration physical and mental, internal and external. Denis Lavant is superb as master sergeant Galoup, training his squadron in Djibouti, the film building to both a striking crescendo and intensely provocative dance scene.

Bringing us full circle is White Material (2009), a vivid and self-contained rumination on how the outbreak of African civil war leads the farmers of an ailing coffee plantation to desperation and ultimately madness. It’s a gripping and claustrophobic thriller, bolstered by a nuanced Isabelle Huppert, and is analogous of Denis’ evoking clarification from landscape, visuals and character emotion over explicit dialogue. One of the most significant, unique and indeed prominent French filmmakers working today, Claire Denis is a beacon of independent cinema that is rarely bettered, nor matched.

Win a copy of The Claire Denis Collection box set with our latest competition. Follow this link to enter.