To this day, Die Hard (1988) is still regarded as one of the quintessential action movies of our time. It birthed a new action hero in John McClane, and it helped make Bruce Willis one of Hollywood’s premier action stars. Twenty-five years on and three sequels later, with the fifth instalment of the franchise nonsensically titled A Good Day to Die Hard (2013), it’s disheartening to see how much the quality of the films has fallen. Directed by John Moore, Die Hard 5’s problems run far deeper than just the 12A rating. This time round, NYC cop John McClane (Willis) travels to Moscow to help his wayward son Jack (Jai Courtenay) after he is arrested for murder.

Unbeknownst to John, Jack is now a CIA operative on an undercover mission, and soon the two McClanes find themselves being pursued by Russian terrorists. Proceedings start off amiably enough; it would seem that John’s relationship with his daughter (Mary Elizabeth Winstead) has mended after the events of Die Hard 4.0 (2007) and it’s refreshing to watch. Once the character touches down in Moscow however, almost nothing of what made John so great to watch in previous Die Hard films is to be found here. The character’s sardonic nature is only glimpsed fleetingly, replaced instead by a rather annoying caricature who repeatedly states that he’s “on vacation”. 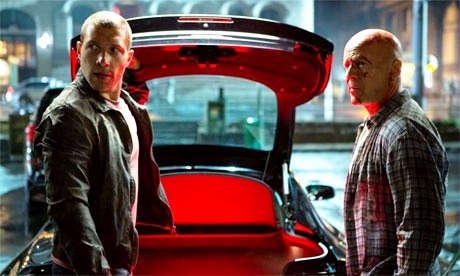 Skip Woods’ uninspired screenplay goes to such contrived lengths as to have a taxi driver sing Frank Sinatra in an attempt to score cheap laughs. Further diluting the formula is the aforementioned 12A rating, which cuts McClane’s signature line even though similar profanities are spoken earlier in the film. In other words, A Good Day to Die Hard’s grossest sin is that at no point does it feel like a Die Hard movie. Perhaps the biggest missed opportunity is that of the father-son bonding. Courtenay does a solid job as the junior McClane, but Woods’ script is so focused on the action that there is not enough room for the film to breathe and get to the heart of the damaged relationship in the terse 97-minute run time.

Speaking of which, unlike its predecessors A Good Day to Die Hard isn’t a great action movie either. Of the three major set pieces, the decent opening car chase is the only one not to be marred by the downright horrible CGI. Additionally, where once McClane’s repartee with slimy villains was something to look forward to, here the unmemorable baddies match the equally forgettable plot. Simply put, the stakes never seem that high, a feeling that is further illustrated by McClane’s carefree attitude throughout.

A below average action movie that has no business having the Die Hard moniker attached to it, even the staunchest fans of the franchise will find it hard to forgive A Good Day to Die Hard’s failings. If this was the first instalment of a franchise – and if it was it would surely be the last – we would not have known any better and it wouldn’t be as painful to watch. But we do. And it is.