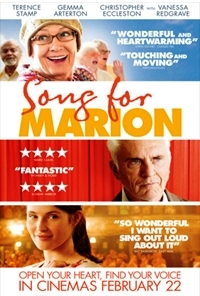 British features centred around the older generation are becoming more and more commonplace of late, with the latest filmmaker to focus their attentions upon senior citizens being Paul Andrew Williams. Looking at Williams’ work to date – which illustrates the director’s affinity for the crime and horror genres – his decision to tackle a comedy-drama would seem a curious one. However, thanks to two excellent lead performances, Song for Marion (2012) eventually proves to be a heart-warming watch. The film revolves around Arthur (Terence Stamp), a miserable pensioner taking care of his cancer-afflicted wife, Marion (Vanessa Redgrave). 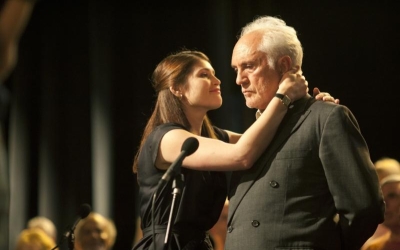 To Arthur’s great irritation, Marion spends her time singing with the local ‘OAPZ’ choir. When she succumbs to the illness, Arthur must re-evaluate his life – with the help of choir director Elizabeth (Gemma Arterton) – whilst mending his relationship with his son (Christopher Eccleston). Like an X-Factor audition, the musical element to Song for Marion succeeds and fails on its song selection; a rendition of Cyndi Lauper’s True Colours tugs at the heartstrings, whilst performances of Salt-n-Pepa’s Let’s Talk About Sex is more likely to elicit cringes than laughs.

In fact, this scattergun approach is true of much of the film’s well-meaning humour, which does struggle to find a consistent rhythm throughout. Thankfully, the choir is just a facilitator; Williams makes sure to put the spotlight on Arthur’s journey of redemption, and ultimately it is this that makes Song for Marion worth watching. Stamp delivers a fantastic turn as the frequently angry Arthur; emotionally restrained and unlikeable for much of the film but always engaging, watching the character gradually come out of his shell is a poignant exercise. Redgrave’s portrayal of the slowly deteriorating Marion is also praiseworthy, hitting all the required notes without once becoming overly sentimental.

Elsewhere, Arterton proves herself capable once again as the passionate Elizabeth, although her character is easily the weakest of the ensemble, a contrived break-up with boyfriend subplot especially falling flat. Marketed as being ‘inspiring, moving and laugh-out-loud funny’, Song for Marion doesn’t quite fulfil its third promise often enough. Nonetheless, the uplifting story and impressive lead performances make it easily recommendable for more mature audiences.