Continuing the current trend of bringing live-action fairytales to the big screen, Bryan Singer’s fi-fi-fo-fum fantasy Jack the Giant Slayer (2013) (not ‘Killer’ – that might scare the kids) finally reaches UK cinemas this week, with Nicholas Hoult, Stanley Tucci and Ewan McGregor all in-tow. Opening in a manner not dissimilar to that of Hellboy II: The Golden Army (2008), we’re presented with a rather unappealing CGI prologue. Once upon at time, the kingdom of Albion was ravaged by an ancient feud between a race of (cockney) giants and a congregation of noble kings, brought on by some devious monk dabbling in the dark arts. 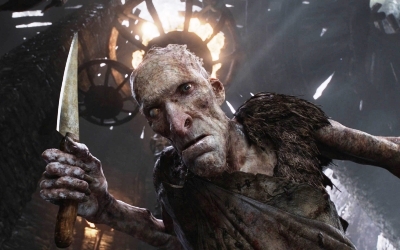 The then-king eventually vanquished the ghastly goliaths, with the giants swearing vengeance should they ever be inclined to return. We are then introduced to humble farm boy Jack (Hoult), who whilst mucking out the sheds dreams of high adventure, but is unfortunately stuck living with his despairing relations. Jack meets his inverted self in the form of plucky princess Isabelle (Eleanor Tomlinson) who also seeks excitement outsides the confines of her castle walls, having already uncovered a plot by the King’s chamberlain, Roderick (Tucci), to claim the kingdom for himself by rekindling the ancient war been men and giants.

A classic British fairytale is buried beneath swaths of CGI creations and green-screen vistas, yet still retains some of the memorable elements of the original tale, including magic beans, lumbering giants and, of course, the hapless yet amiable Jack. Singer lifts out these plot points and does what he does best – makes the story as grandiose and spectacular as possible. Not satisfied with the Boy’s Own-style of the traditional story, the peril is ramped up further by putting the entire nation of Albion in peril, as well as adding a Catholic conspiracy subplot worthy of Dan Brown himself. This all works to a point, thankfully laced with decent performances from a surprisingly cuddly Ian McShane (King Brahmwell) and a plummy Ewan McGregor (Elmont).

Whilst the performances (largely) hold out and the CGI is suitably glossy, Jack the Giant Slayer does inevitably disappoint. One could be forgiven for feeling that they’ve been put through a ringer of endless fairytale adaptations of-late, further compounded by the fact that Singer’s screenplay here is at best conventional, at worst tedious. The original story has been opened up to allow for big budget battles, but Jack still lacks what all good fairytales need – genuine magic. Singer’s latest glides across your eyes and swoops past your ears, but leaves no lasting impression other than one of dull, partial adequacy.