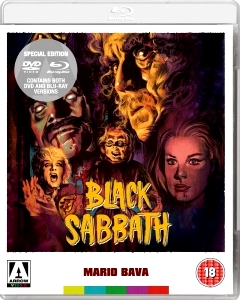 Mario Bava’s playful portmanteau piece Black Sabbath (1963) is reissued by Arrow Video this week in a comprehensive two-disc set. Featuring three horrific tales of varying effectiveness, each introduced by the legendary Boris Karloff in tongue-in-cheek vignettes, the film owes a great deal to Alfred Hitchcock Presents. It also serves a great showcase for Bava’s talents, all shorts being of a different tone and tackling different genre with assurance. Up first is The Drop of Water, a creepy piece focusing on Nurse Helen (Jacqueline Pierreux), called to tend the body of a recently deceased medium by her distraught maid. 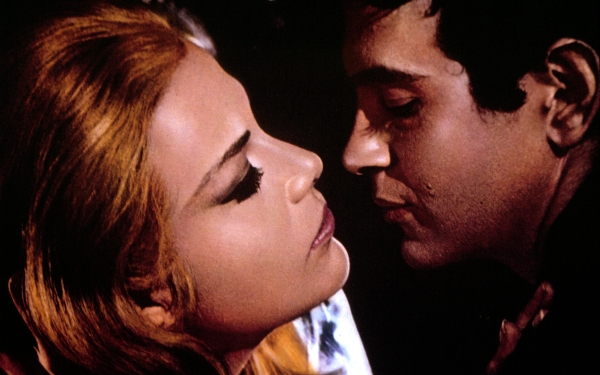 While dressing the corpse for burial, Helen can’t resist pilfering the old dear’s ring, only to be haunted by the eerie sound of dripping and some unexpected visions upon returning home. Comprised of gorgeous sound and lighting design (deep reds, greens and purples glaze the screen throughout), this is atmospheric, unsettling stuff which builds to a spectacular crescendo and sly coda. The Telephone sees a shift to more pulpy, noirish fare as Rosy (Michèle Mercier) is terrorised in her apartment by mysterious, threatening calls from an unknown man.

Making great use of its claustrophobic setting and ultimately redolent of Henri-Georges Clouzot’s Les Diaboliques (1955), the English language version also marries the supernatural and the earthly to provide a satisfying ambiguity. The Italian version of the film, I tre volte della paura, strips back The Telephone’s otherworldly elements and makes explicit a lesbian subplot only hinted at in the other cut. The result is a more standard revenge yarn, but an equally enjoyable one. As well as the changes made to The Telephone, I tre volte della paura drops Karloff’s individual introductions to the shorts and changes the order in which they appear.

While the Italian film concludes with The Drop of Water, Black Sabbath has as its final instalment The Wudalak, a fable of 19th century vampirism based on Aleksei Tolstoy’s novella The Family of the Vourdalak. Deeply silly, faintly incoherent and somewhat overstaying its welcome with a running time which dwarfs the other two, The Wudalak is nevertheless a fun and fitting conclusion to the compendium. Karloff himself plays bloodsucker Gorca, chewing on scenery and unfortunate family members with equal relish, as the themes of betrayal, retribution and the sanctity of the home which permeate all three stories are nimbly tied-up in a misty, shadowy denouement.