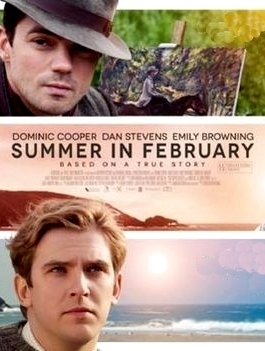 Hoping, no doubt, to capitalise on the recent international success of ITV’s Downton Abbey and other successful historical dramas on the big screen comes Christopher Menaul’s Summer in February (2013). Adapted by Jonathan Smith from his own novel, this is a fictionalised account of a period of high emotions and scandal in the bohemian wing of the Newlyn School of artists. Based in a Cornish village before the First World War, it was a haven for the likes of equine painter Alfred Munnings, and Harold and Laura Knight. Whilst controversy does abound, sadly the film never quite manages to quicken the heartbeat fittingly.

Florence Carter-Wood (Emily Browning) arrives in the Newlyn-Lamorna colony in 1913 with the hopes of improving her skills. She very quickly catches the eyes, however, of two close friends; unassuming military man Gilbert (Dan Stevens), and famed painter ‘A.J.’ Munnings (Dominic Cooper). As the men compete for the young woman’s heart, their friendship is stretched and a love triangle emerges against the windswept coastal landscape. The acceptance of a marriage proposal from one suitor inflames rather than extinguishes the romantic tension in he otherwise peaceful locale. 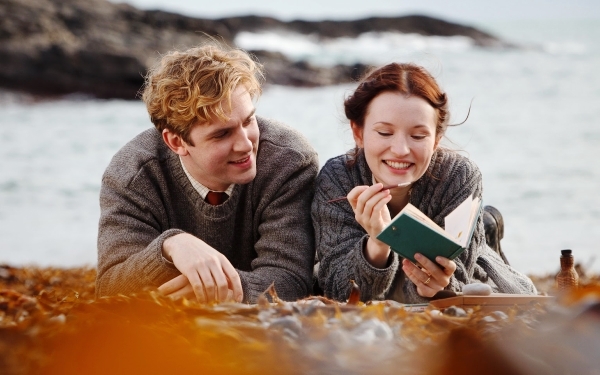 So far, so ‘television period drama’, one would be forgiven for surmising. This label is certainly not shaken loose by the presence of a veteran TV director behind he camera, nor a recent star of the small screen in front of it; though neither of these things turn out to be what ultimately hampers Summer in February most. Whilst the visuals do not utilise the full potential of the cinematic canvas, they are suitably woozy and help to create a sense of the atmosphere in Lamorna. Stevens is probably the pick of the actors too, conveying the reserve of his Welsh soldier aptly. It is hard to quite gauge the performances of the other two leads, though, as they suffer more from the films alarmingly brisk pace.

Particularly in its opening half, Summer in February feels a lot like a television series that has been cut down to fit into a feature film. Moments in which characters need to have time to emote are truncated and it creates a plot that begins to bewilder rather than bewitch. In some instances, the mantra of “show, don’t tell” is reversed entirely (the scene in which the title is explained being the most cringeworthy example) but for a lot of the time it appears that information has been omitted completely. As such, characters’ motivations often make no sense at all and people veer wildly between being likeable and ghastly with little attempt to provide explanation or context.

Whilst it’s painfully clear who the audience is supposed to root for to win Florence’s heart, by the time the plot has reached it’s climax it becomes immensely difficult to relate to or care for these characters – most could well wish they’d avoided the whole affair. Sadly, for a template melodrama such as Menaul’s Summer in February, this is a crippling blow that leaves it coming up well short of passable.