Film Review: ‘From Up on Poppy Hill’ 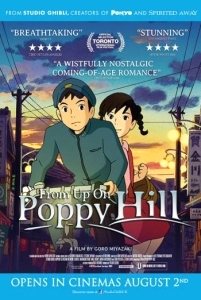 It’s fitting that as My Neighbour Totoro celebrates its 25th anniversary, Studio Ghibli’s From Up on Poppy Hill (2011) hits UK shores. A tiny film about tiny things, it seems like a slight addition to the Ghibli catalogue, but under the surface lies a big heart. It starts, as all good things do, with breakfast – and a song. In Yokohama, 1963, Umi (Masami Nagasawa) runs the house while her mother studies abroad. When Umi’s not looking after her younger sister and grandmother, she’s going to school or raising the flags by their cliff-top house in memory of her dad, who died in the Korean War. One day, Umi meets a Shun (Junichi Okada).

That’s the whole plot of the film. But the couple’s romance carries big consequences for their petite world. Shun runs the school newspaper, which is based in the old clubhouse. When he’s not making stencils and printing the headlines, he’s protesting against the demolition of the building, which is being replaced for the 1964 Olympics. That balance of old and new underpins From Up on Poppy Hill, introducing a melancholic note that lingers behind the youthful optimism. 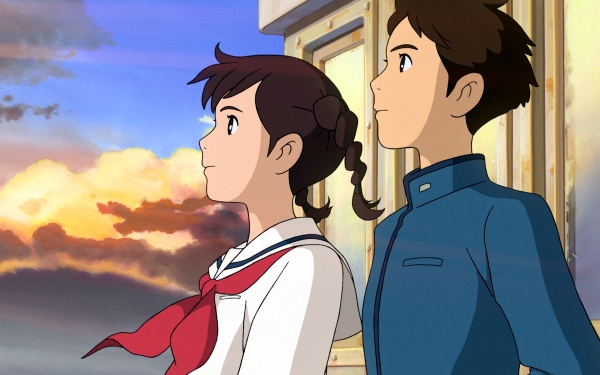 When Umi visits the clubhouse for the first time, a den of whirring clockworks and squeaking pulleys, the dust-filled happiness is palpable thanks to some truly mesmerising animation; a delightful cloud of hand-drawn nostalgia. The wistful appeal deepens further when Umi unearths an old photo of her father in the navy – only to discover that Shun has the same photo. Are they somehow connected? Shun and Umi delve into Japan’s conflict-strewn past, just as the country is moving on from it. At the same time, Umi spearheads a mass clean up of the clubhouse, renovating history rather than losing it altogether. It seems apt that Gorō Miyazaki should direct such a tale, taking over the reins from his revered father.

Unlike Gorō’s previous effort, the uneven Tales from Earthsea (2006), From Up on Poppy Hill benefits by embracing a smaller scale. Its repeated use of flashbacks may occasionally grate, but the screenplay (co-written by Hayao Miyazaki and Keiko Niwa from the comic by Tetsurō Sayama) strolls through the relaxed 96 minutes, unafraid to soak up the little things on the screen. This attention to detail is what brings the village of Yokohama to life; the bubbling of eggs in a pan, the rattling of bikes in the streets, the bellowing of foghorns at sea.

Accompanied by a joyous, honky-tonk score from Satoshi Takebe and earnestly voiced by its leads, this is a perfectly rendered world that quietly throbs with sadness and thrums with modern progress. Amid such a realistic environment, From Up on Poppy Hill’s story of a girl meeting a boy is unabashedly simple – but irresistibly charming. It’s no meaty dinner, but sometimes breakfast can be the most satisfying meal of the day.