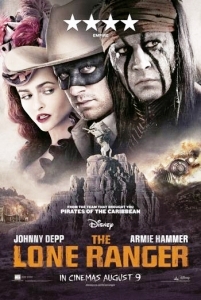 Heard on radios and seen in books since the 1930s, a masked lawman and his faithful Native American sidekick galloped into hearts and minds with an iconic 50s TV show. Disney have now charged the team behind the Pirates of the Caribbean franchise with doing for cowboys what they managed with buccaneers. Thus, the famous crime-fighting duo have been hog-tied and dragged into the 21st century for Gore Verbinski’s The Lone Ranger (2013), with Johnny Depp continuing his flamboyant oddball run as Tonto. Staring in a 1933 fairground, a boy meets a withered Comanche who recounts his fantastical story.

The tale begins over sixty years earlier when upstanding lawyer John Reid (Armie Hammer) foils Tonto’s attempt to kill the vile bandit Butch Cavendish (William Fitchner) in the prison car of a train headed to Colby, Texas. A subsequent assault on said train sees the varmit escape and flea into the wild with his gang. Mirroring the original story, a group of rangers – with John tagging along – set out to apprehend him but the posse is double-crossed and slaughtered in a canyon. Tonto comes to the aid of John, and the pair unite to hunt Cavendish down – with Reid in disguise behind the famous domino mask. 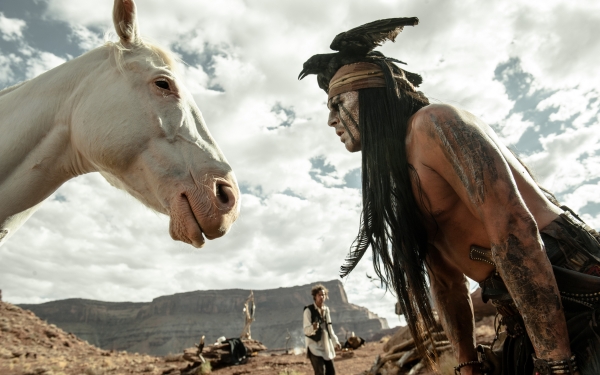 Sadly, what could easily have shaped-up as a gripping adventure yarn has a lot more in common with the bloated and dour At Worlds End (2007) than the swaggering Curse of the Black Pearl (2003). It commits the cardinal sin of any romp – that is to be laborious – with neither the action nor the comedy hitting the requisite marks. The spectacle is overblown and never excites, whilst the humour is largely reserved for Hammer’s fine, but never inspiring, Reid and Depp’s sub-par riff on his own most iconic creation. Verbinksi’s The Lone Ranger also attempts to navigate far more sinister and serious terrain – a bold and interesting decision for a film from Disney’s House of Mouse – but it never quite comes off.

Cavendish, it transpires, is not just a gun-toting bandit but a maniac with a taste for human organs. To extenuate this re-write, Tonto’s story places huge attention on the slaughter of his people, but in such a hundred-mile-an-hour train ride of a movie, it’s never reflected on with anywhere near enough care to really hit the spot. Fervent fans of Depp’s gallery of grotesques may find the film enjoyable enough (though Tonto is no Captain Jack), and there’s plenty of action to numb the mind some, but this is hardly the kick in the keister the western genre has been crying out for.

Regrettably, Disney’s The Lone Ranger quickly becomes painfully tiresome; the overlong plot lacks smarts; the action (a train wreck aside) lacks thrills; and the cascade of characters (including turns from Helena Bonham Carter and Tom Wilkinson) lack the necessary depth or spark. At over two-and-half hours long, you may get a lot of bang for your buck, but Verbinski’s mask-adorned caper isn’t half as entertaining as it could have been.