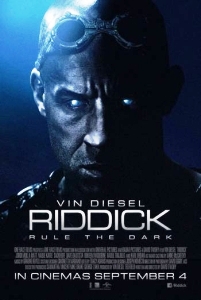 Vin Diesel’s belated and unwelcome return as Riddick’s (2013) titular anti-hero proves to be not just a pitiful example of ‘churn ’em out’ genre cinema, but is also perhaps set to be the most chauvinistic, sexist movie of the year. David Twohy returns to direct for the third time, abandoning the eye-brow-raising aesthetic of second instalment Chronicles of Riddick (2009) whilst also ditching the stripped-down quality of Pitch Black (2000), instead attempting to produce a mash-up of the two. The result, sadly, is highly questionable. We last saw Riddick conquering the shadowy Necromongers before being left for dead on a distant desert planet. 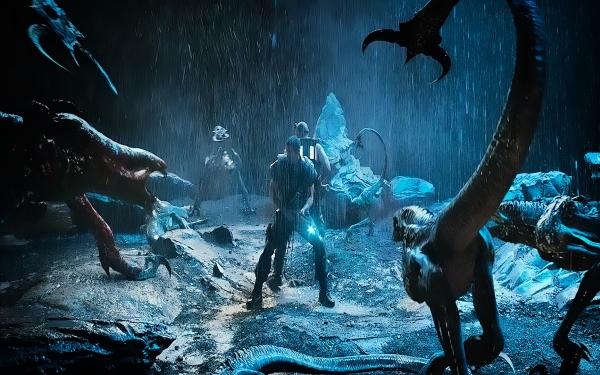 Following an overly long prologue where we witness the knife-wielding Riddick befriend a mutant alien puppy (!?), crawl across the sand dunes with an injured leg and battle venomous, water-dwelling creatures, we find ourselves finally getting to the action – sort of. In a bid to escape from the deadly planet, Riddick activates a homing beacon that consequently attracts the attention of two rival clans of bounty hunters. The first are little less than spaghetti western, bandito-style hombres that we can only presume had their handle-bar moustaches and sombreros edited out in post-production. The latter, meanwhile, are a gang of highly-trained commandos, one of whom coincidentally has a link to Riddick’s murky past.

What ensues is very much in the vein of Pitch Black where, after Riddick bumps off those who have annoyed him most (predominantly the mustachioed bandits), the survivors have to band together when darkness sweeps across the land and reveals hordes of nocturnal predators on the prowl. Whilst the throwaway nature of the plot could perhaps be forgiven, this poor example of sci-fi commits too many cardinal sins. The central problem lies in the film’s wanton machismo. The only female character we’re offered, played by Katee Sackhoff (best-known for playing Starbuck in the Battlestar Galactica TV reboot), is subjected to a plethora of wince-inducing punchlines, ranging from areola one-liners to quips about how the characters want to essentially rape her. Twohy’s sheer lack of shame leaves the jaw hanging.

A weakly-developed plot leaves little to chew on, with mind-numbing twists broken up by a parade of dull-witted (or plainly offensive) gags. Twohy, who was aided by screenwriters Stephen Butcher and Oliver Cornwell, also requires us to remember secondary characters from thirteen years past in order to invest in this latest outing. The result is simple – we don’t. Perhaps it’s best to remember Riddick as we first found him – a mysterious loner with little back-story, that entertained as an intriguing, amoral mercenary who occasionally showed heart. Riddick, however, turns him into little more than a gym-fly wearing ridiculous tinted swimming goggles.