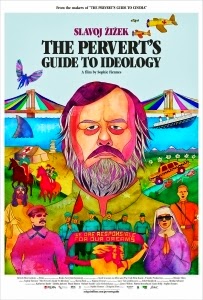 “I already am eating from the trash can. The name of this trash can is ‘ideology.” These are the opening words to psychoanalytic critic and cultural philosopher Slavoj Žižek’s The Pervert’s Guide to Ideology (2013), a new entry in his growing Pervert’s Guide series. Escalating from the analysis of fantasy and reverie in cinematic construction, Žižek delivers a full-bodied, genuinely humorous account of ambiguity and austerity. The concept of ideology as a sociopolitical tool used to appropriate a system of ideals has been barked from every intellect’s pedestal for centuries, but here is given fresh impetus by our able host. 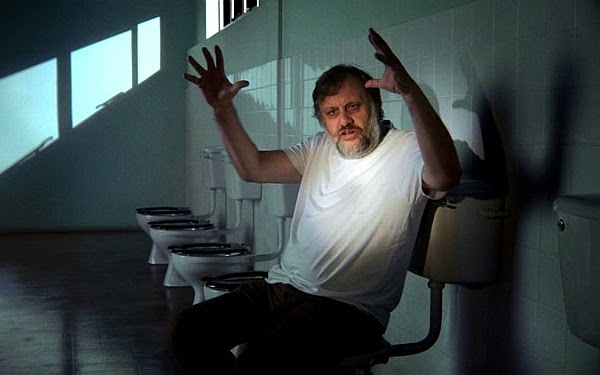 It’s Žižek’s evident zeal and vigour in his filmic examples that enable his ponderous ramblings to fly beyond that of a stodgy specimen of public speaking. Using excerpts from classic Hollywood movies including The Sound of Music (1965) and John Carpenter’s criminally undervalued They Live (1988), Žižek refuses to hold his audience’s hand with vocal linearity. Instead, we see the thinker apply cinema as a propeller for his incessant theorising. However, unlike the rambunctious chaos of 2006’s The Pervert’s Guide to Cinema, his approach to ideology is far denser and complex. Žižek presents ideology as an omnipresent framework for society, with movie scenes a readable conduit between theory and reality.

Largely, improvised, Žižek plants himself directly in the aesthetic of his films. Here, he sheds unbelievable, paradoxical light on scenes one would never have imagined prior. Seated alongside a naked porcelain woman adorning an orange wig, surrounded by harsh bulbous lighting cast on a black backdrop acts as a faultlessly witty homage to Stanley Kubrick’s A Clockwork Orange (1971). His charm and intellectual allure is what has transformed his political soapbox into a worldwide stage. Without it, The Pervert’s Guide to Ideology would be instantly debunked and dismissed by his target audience.

Once again recruiting doc director Sophie Fiennes proves nothing short of essential in finding coherency in Žižek’s Byzantine performance. According to Žižek, it took almost a year for Fiennes to construct the Pervert’s Guide follow-up; unsurprising considering Žižek’s addresses usually lasted up to 17 minutes per cut. The philosopher may be The Pervert’s Guide to Ideology’s singular protagonist, but he owes everything to the directorial nous of Fiennes in structuring his argument. It takes an academic to star in this heady scholastic narrative, but it also takes a fine director to make this movie the all-round cerebral success it thankfully is.