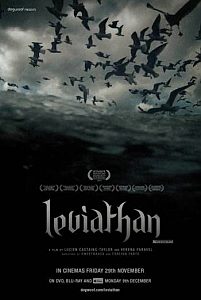 The latest remarkable offering from Harvard University’s Sensory Ethnography Lab (whose additional credits include Sweetgrass, Foreign Parts and the upcoming Manakamana), Lucien Castiang-Taylor and Verena Paravel’s hulking behemoth of a documentary, Leviathan (2012), rightly caught the eye after scooping up the top prize at the Edinburgh Film Festival earlier this year. Unlike any other doc seen this year – or any year, for that matter – Leviathan soars above the black waves of the Atlantic before plummeting into the depths as it follows a group of hardened fishermen trawling for their prey off the New Bedford coast. 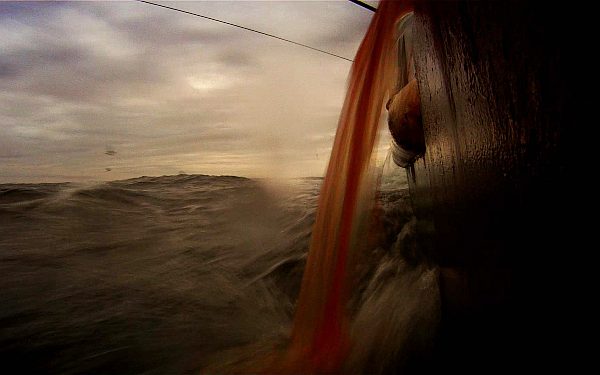 With some truly extraordinary visuals coming courtesy of hundreds of miniature GoPro cameras clinging like barnacles to the film’s imposing trawler, its nets and even its crew, Castiang-Taylor and Paravel leave no scale unturned in their attempts to capture life aboard a modern day fishing vessel. Sea life of all shapes and sizes are dragged aboard by a small team of tattooed hunter gatherers before either suffocating to death or coming face to face with a razor-sharp blade. Gulls, an almost ever-present chorus circling and wheeling above the apparently orderly carnage below, dive in droves to sift through the scraps. As the merciless harvest continues, we’re privy to moments of ethereal beauty amidst the blood and the brine.

Already divisive amongst those privileged enough to have taken the plunge, for a certain section of its potential audience, Leviathan will almost certainly try the patience of those with little. There’s no soothing celebrity narration to guide our thoughts, no fancy graphics to provide statistical context to the fishing industry and no orchestral score to rouse the soul. This is nature, if not quite red in tooth and claw, then brown in rust and flesh-covered bone. The squeamish will recoil at scenes of rays being clinically butchered before their remains are thrown overboard, or of codfish heads swashing around the deck, eyes glazed and lifeless. And yet there are also moments of Herzogian wonder as we pass through the steel Goliath’s enormous digestive system. One in particular sees an inquisitive gull struggle to life itself onto a raised step, its wings an ill fit for the task at hand.

Leviathan’s one debatable drawback is also perhaps its greatest asset – namely its neutral, purely anthropological stance towards the type of industrialised trawling documented therein. Dedicating itself to the lives of the men lost along this infamously treacherous stretch of open ocean (renowned for its starring role in Herman Melville’s early modern classic Moby Dick) rather than the billions of fish, crustaceans and other creatures engulfed by humanity’s insatiable hunger, any potential dismissal depends purely on interpretation. Have Castiang-Taylor and Paravel chosen to immerse themselves and their audience in the filth and grease of gross consumption in order to silently critique it? Perhaps, but what is certain is that few films this year will evoke such a physical reaction – for better or worst – in its schools of captive spectators.