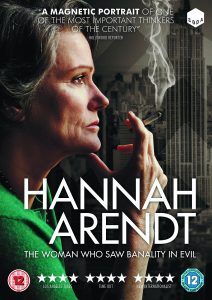 ★★★☆☆
Set around the publication of the incendiary New Yorker article on the heinous deeds and belated trial of Nazi war criminal Adolf Eichmann by its titular German-American political theorist, Margarethe von Trotta’s Hannah Arendt (2012) is a glossy, plainly televisual depiction of one woman’s strongly-held and controversial beliefs. A European co-production between Germany, Luxembourg and France, there’s more than a little hero worship at work here, but this dramatisation of the conception of Arendt’s most compelling (and divisive) concept – “the banality of evil” – fortunately comes into its own in the final rousing act. 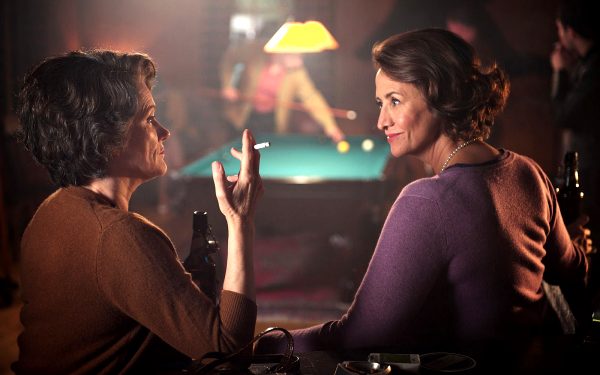 Taking an authorised leave of absence from her role as a German-language lecturer, in 1961 Arendt travelled to Jerusalem to cover the Eichmann trial for The New Yorker. Perplexed by the unremarkable, “average” individual she sees before her (courtesy of actual footage taken from the time), Arendt’s five-part examination of Eichmann’s purported crimes and ambiguous motivations would introduce her now-famous theory of evil’s roots in normality, triggering an enormous wave of unprecedented anger and vitriol aimed squarely at herself and the paper. Labelled a “self-hating Jew” and denounced by many she once called friends, Arendt battles valiantly to clear her name in the face of extreme prejudice and hostility.

Cultivated German actress Barbara Sukowa is suitably stubborn in the title role, imbuing her chain-smoking Arendt with the necessary gumption and fortitude needed to bat away the naysayers of her groundbreaking new theory. Internal conflict is clearly evident in her dual role as victim turned commentator, having once been detained by French forces prior to Nazi occupation. Now able to address the heinous acts committed against her people in a clinical, even aloof manner, Arendt successfully identified the pivotal role of bureaucracy in the machinations of the Third Reich, allowing Eichmann and his contemporaries to admonish themselves from the guilt of facilitating the deaths of approximately six million Jews during the Holocaust.

Disappointingly, the rest of Hannah Arendt’s cast are perfunctory at best, serving either to support our heroine’s claims or belittle them outright. Her relationship with second husband Heinrich Blücher (Axel Milberg) – who suffers a near-fatal brain aneurysm halfway through proceedings – shows glimpses of genuine warmth, but always plays second fiddle to her own tireless pursuit of recognition and validation. What von Trotta is clearly most interested in here is Arendt’s unwavering conviction that Eichmann, and other men guilty of perpetrating similar “evil” acts against humanity on such a grand scale, are a product of institutionalised coherence rather than psychotic fervent – which comes across loud and clear in the film’s impassioned, redemptive closing speech.

Read our special feature on von Trotta’s Hannah Arendt and the “banality of evil” by following this link.