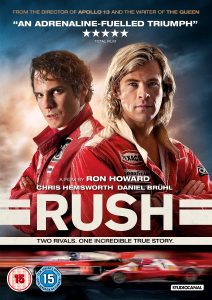 Roaring onto DVD and Blu-Ray this week comes Ron Howard’s Formula One racing drama Rush (2013), starring Chris Hemsworth (Thor) as James Hunt and Daniel Brühl as his arch-rival, Austrian driver Niki Lauda. Although bookended with a slightly broader context, the main thrust of the film is the 1976 F1 season which facilitated one of the most fascinating head-to-heads in modern racing history. Hunt is the flamboyant playboy, whose devil-may-care approach on and off the track teeters towards self-destruction. Lauda, on the other hand, is the Mr. Bean of the circuit: socially inept, yet doggedly determined. 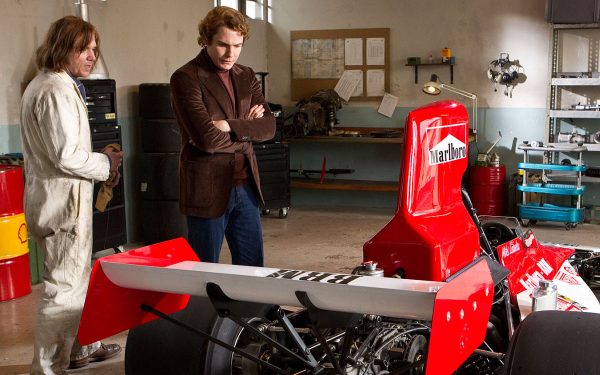 The initial advantage goes to the technically superior Lauda, confirming many commentators’ suspicions that Hunt is a superficial amateur. However, the rivalry intensifies through personal animosity when a Hunt victory in Spain is ruled out due to Lauda drawing the attention of the officials to a technical breach of the rules. Meanwhile, in their personal lives, Lauda is finding love and beginning to open up as a human being even as the wheels begin to come off Hunt’s misguided foray into marriage. A terrifying showdown at the infamous Nürburgring race track in torrential conditions will, however, turn this sporting competition into something larger than the mere winning of a series of races as Lauda must battle for his very life.

Formula One has a poor track record when it comes to cinematic representations, from Steve McQueen’s bloated vanity projects to the largely forgotten, CGI-injected silliness of Sylvester Stallone vehicle Driven (2001). Whether this is due to the relative lack of popularity for the sport in the US or the weird propensity to append the blandest of titles to the final product, who can tell? However, Howard’s breakneck drama – from a screenplay by Frost/Nixon collaborator Peter Morgan – has the advantage of history on its side. The period allows for a nostalgic longing and the real life twists and turns (chicanes, if you will) are more compelling than most invented narratives.

Although following a similar trajectory of antagonism transforming into something resembling friendship, the Hunt/Lauda affair Rush does feel like a lightweight cousin to Howard and Morgan’s superior Frost/Nixon. The racing sequences are brilliantly evoked, but in between the film goes off track: Lauda’ love affair is baffling and playboy Hunt goes AWOL for large sections of the latter half. What we’re left with, then, is a competent and proficient retelling of some extraordinary moments in motor sport history, complete with some excellently reproduced sequences. And yet, as Lauda wins the narrative battle, it is perhaps only inevitable that Rush loses some of its initial flair and verve.

Win a DVD copy of Ron Howard’s F1 drama Rush with our latest competition. Follow this link to enter.