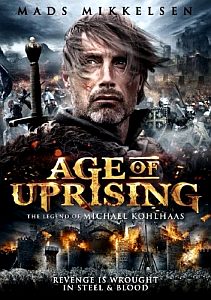 ★★☆☆☆
One of the more eyebrow-raising nominees for last year’s Cannes Palme d’Or, French director Arnaud des Pallières’ Age of Uprising: The Legend of Michael Kohlhaas (2013) sees European cinema darling Mads Mikkelsen star as the vengeful equine breeder in question, spurred into armed conflict against a greedy local land baron. With Holy Motors’ Denis Lavant, Bruno Ganz and rising German star David Kross perhaps the only other recognisable players for British audiences, there’s little to distract one from this drab literary adaptation’s ponderous pace and washed out palette – even the great Dane himself. 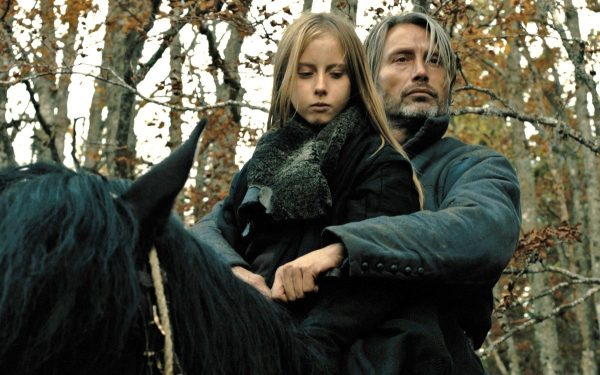 Deep in the rural heartland of 16th century France – the Cévennes to be exact, rather than the Cölln of German author Heinrich von Kleist’s source text – noble nag dealer Michael Kohlhaas (Mikkelsen) lives out a contented and peaceful existence with his beloved wife and young daughter. That is until a repugnant local upstart with delusions of grandeur takes his finest animals and destroys his family in the blink of an eye. Radicalising himself in the name of revenge, Kohlhaas turns revolutionary leader, banding together a small army of fellow farmers and peasants in order to overthrow the tyrannical rule of their bloodthirsty lord and master. But what will be the cost of such far-reaching retribution for Kohlhaas and his cohorts?

More of a question mark on Mikkelsen’s undoubtedly impressive résumé than a black stain, Age of Uprising comes all too near to rehashing some of the narrative twists and turns that made his leading turn in another recent period piece, Nikolaj Arcel’s A Royal Affair (2012), such a delight. Whereas his ascent to a position of enlightened power in the latter was a joy to behold, Mikkelsen’s gradual evolution from muddied horse botherer to calculated military tactician is so lethargic – not to mention uneventful – as to strip des Pallières’ of almost all of its dramatic potential. Even Lavant’s brief cameo as a roving theologist towards the finale can’t spark the disappointingly bland Michael Kohlhaas into life – surely the most damning indictment of all.