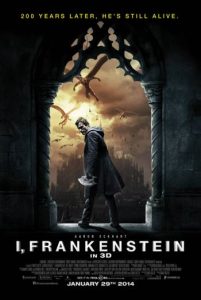 Unless you’re a fan of the original source material on which a film adaptation is based, you’ll likely derive more pleasure from the viewing experience if you go in knowing nothing about it beforehand. This is certainly the case with Stuart Beattie’s action fantasy I, Frankenstein (2014), starring Aaron Eckhart, Bill Nighy, Miranda Otto and Yvonne Strahovski. The greatest creation of the infamous Victor Frankenstein (Aden Young) has survived his maker’s best efforts to destroy him. Leaving humanity behind, the monster (Eckhart) has lived over two hundred years in the frozen wilds beyond the furthest reaches of civilisation. 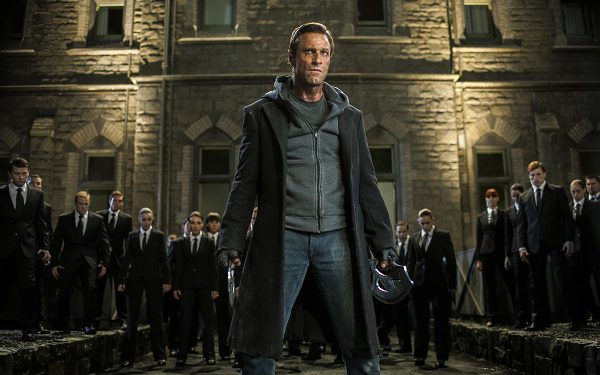 However, now a cataclysmic battle between the angels of Heaven – led by their queen, Leonore (Otto) – and the demons of Hell, commanded by their master, Naberius (Nighy) – is about to unleash Armageddon on Earth, and only Frankenstein’s monster can stop it. It would be cruel to damn a film which, in and of itself, provides a reasonably harmless way to pass ninety minutes if you’ve nothing better to do. However, as with the glut of comic-book inspired outings which clog the local multiplexes with increasing regularity (and yes, the spate of this year’s offerings will soon be on their way), unless you’re a true fan who follows the intricate machinations of each of the characters in minute detail, you’ll likely be left cold.

Which is probably how you’ll feel with I, Frankenstein, a movie which promises plenty but in reality offers very little. If you like your tales of mad gentry and man-made monsters taking place in some mist-shrouded European castle, then this is not the film for you. Eckhart makes a suitably angst-ridden and ruggedly scarred creature, whilst the scientific interest this time round comes in the form of the attractive Strahovski, and there’s enough laboratory apparatus and sparkling electricity to evoke vague memories of Boris Karloff back in 1931. However, put Beattie’s film under the microscope, and the one thing it’s missing is the very element the Baron in Mary Shelley’s Gothic fantasy gave his creation – life.

Clearly in an effort to appeal to today’s youth market, the filmmakers have yet again remodelled a literary character into a CGI-enhanced shadow of its former self. Take away the arching story of a battle between good and evil in the form of gargoyle angels and seen them before devils spawn, in which Frankenstein’s monster inadvertently finds himself a player, and there’s really nothing of any substance beneath. I, Frankenstein’s finale predictably leaves it open for a sequel, the thought of which would likely have the Baron and his creation spinning in their graves. Let’s hope for their sakes, and ours, that the studio has the sense to leave this sleeping corpse well alone.