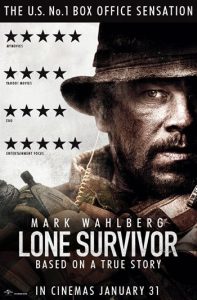 Peter ‘Battleship‘ Berg returns to UK cinema screens this week with Lone Survivor (2013), a film which – depending on your own personal sensibilities – comes across as either a rousing testament to America’s men of valour or a teeth gritting exercise in patriotic tub-thumping. Berg may have pushed the boat out somewhat from his previous blockbuster outing, favouring apparent ‘realism’ over CG bombast. However, the overall didactic feels ominously similar – the US military is once again at war against a merciless, swarming antagonist who would love nothing more than to see Uncle Sam’s finest return home in boxes. 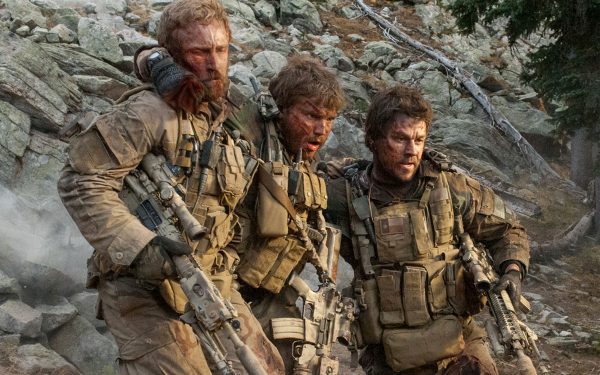 Based on former soldier Marcus Luttrell’s bestselling book, Lone Survivor tells the bloody tale of four Navy SEALs (played by Mark Wahlberg, Ben Foster, Emile Hirsch and Berg regular Taylor Kitsch) on a mission behind enemy lines to assassinate a high-ranking Al-Qaeda operative before being ambushed by an overwhelming force. Turning on one crucial moment of indecision, the squad find themselves without air support and hunted through the pines by AK-wielding Taliban aggressors. Along the way, bones are cracked, lungs are punctured and last stands made in the face of insurmountable odds, with Berg and his team going to noteworthy lengths in his quest to portray the “necessary evil” of war for audiences back home.

Lone Survivor may have served its original purpose – whatever that may have been – had it not been so mind-numbingly repetitive. After a fairly tense exposition and one nail-biting moral quandary, Berg defaults into Battleship mode with a cacophony of gunfire and explosions, resigning what is a perfectly decent cast to mad dashes and grunted one-liners (at one point, Foster’s Matt ‘Axe’ Axelson fixes a target in his crossfires before daftly uttering “You can die for your country, I’m gonna live for mine.”). That an actor of Foster’s calibre, almost always the outstanding performer in whatever he lends his talents to, is given so little to work with is just one of many misdemeanours that Berg could rightly be accused of. Wahlberg, Hirsch and Kitsch all find themselves faced with a similar dearth of inspiration, but do admirably throw themselves into their respective roles (and down any number of craggy cliffs, The Princess Bride-style).

Though not entirely black and white in its meditation on modern conflict thanks to a sentimentalised finale – which does at least recognise the existence of Afghanistan’s beleaguered civilian population – what comes before it is loud, abrasive and deeply troubling in its drawn-out gaudiness. War certainly is hell, but it’s not unthinkable that some viewers will develop their own sense of war-weariness after watching Wahlberg et al. having their extremities shot off in gory detail for ninety-plus minutes. Though not as reprehensible as the bloodless, 12A wargasms of the G.I. Joe franchise and the like, Lone Survivor feels like a backward step for a national cinema that had finally started to address the ongoing War on Terror with something approaching humility and intelligence.