Film Review: ‘Out of the Furnace’ 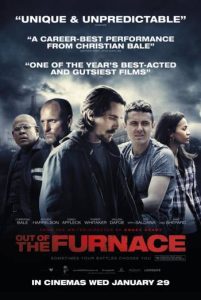 Scott Cooper made his directorial debut with Crazy Heart (2009), a film that won Jeff Bridges an Oscar for Best Actor. For his sophomore effort Out of the Furnace (2013), Cooper once again manages to get the very best from his star-studded cast, but whilst there is admiration to be taken for foregoing a traditional revenge story, the well-intentioned narrative is sadly short on momentum. Set in small-town Pennsylvania, Out of the Furnace centres on Russell Baze (Christian Bale), a virtuous blue-collar man who takes care of his dying Father and looks out for his little brother Rodney (Casey Affleck), an Iraq war veteran.

An untimely accident sees Russell go to jail, and he returns to a girlfriend who’s moved on and a Father who has passed away. Worse still, his younger sibling has fallen into the world of bare-knuckle fighting in a bid to pay off his gambling debts. On the hunt for more lucrative bouts, Rodney begs bookie John Petty (Willem Dafoe) to set up a fight in the backwoods of New Jersey run by psychotic hillbilly Harlan DeGroat (Woody Harrelson). When they don’t return and the police prove reluctant to get involved, Russell takes matters into his own hands. From Out of the Furnace’s first attention-grabbing scene to its finale, Cooper establishes a gritty, realistic world where its characters will do anything they can to simply survive.

Co-written by Cooper and Brad Inglesby, the screenplay concerns itself with many important and relative issues, not least of which is the dwindling economy and how we treat soldiers who fought in the war. Save for one powerfully acted scene when those two issues collide however, these larger themes don’t develop into something truly substantial. Once you strip away these larger themes, what’s left is a bare-bones revenge movie, and one which doesn’t add much at all to the sub-genre. There is a very muted feel to much of Out of the Furnace. There are times when that approach pays off and the inner turmoil makes moments when emotion comes to the fore that much more effective. In this regard, a bridge exchange between Russell and Lena (Zoë Saldana) is a standout. With that said, there are times when that style doesn’t work with what’s happening on screen, and in the final moments especially, what should be emphatic scenes lack all-important impact.

Both Bale and Affleck give layered performances, and the brotherly bond is felt in each conversation Russell and Rodney share, whether they be bantering or arguing. In supporting roles Saldana, Dafoe, Forrest Whitaker and Sam Shepard are all convincing. The flashiest role of the film however belongs to Harrelson; never one to shy away from dark characters, his DeGroat is knowingly cold-blooded – at one point he simply states, “I guess I got a problem with everybody” – and he is an engaging screen presence throughout. Indeed as an acting showcase, Out of the Furnace excels, but there is a limit to how much they can elevate the lethargic narrative. There are flashes of what might have been, but for all its interesting characters and moments of brilliance, the film is never gripping nor, as it turns out, all that thrilling.