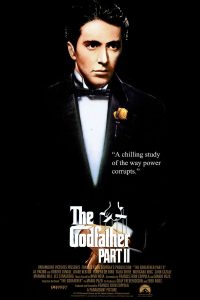 At a pivotal point in Francis Ford Coppola’s masterful crime drama The Godfather: Part II (1974), Mafia kingpin Michael Corleone states, “If anything in this life is certain, if history has taught us anything, it’s that you can kill anyone.” Not only one of the greatest sequels of all time, Coppola’s opus is also perhaps the finest film made about immigrants in the blessed ‘Land of Opportunity’. Boldly following up his widely acclaimed first chapter with a sequel split between two distinct eras – as Michael struggles with his own Godfatherly guilt and, decades before, his father Vito climbs to the top of the ladder – Coppola miraculously exceeded all expectations. 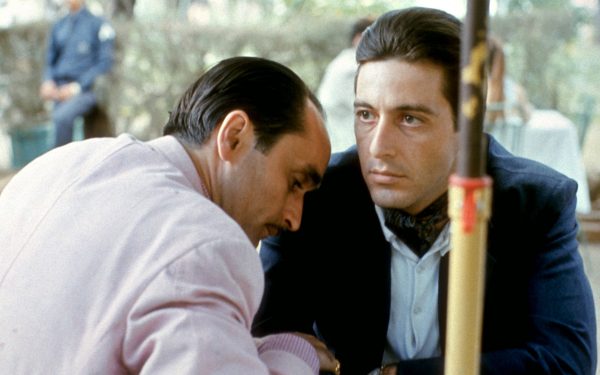 Beginning back in the ‘Old Country’ of Sicily before moving through generations and locales (including New York and Cuba), The Godfather: Part II manages to both continue the Corleone crime family saga whilst at the same time fleshing out its humble, melancholy origins. Robert De Niro co-stars as the young Vito Corleone, a stranger in a strange land who arrives in New York following the murder of his parents. Back in the present, his son and now Godfather Michael (Al Pacino) wrestles with his role as patriarchal overlord, with his crime empire seemingly besieged on all sides. After an attempt is made on his life, threatening the safety of wife Kay (Diane Keaton) and their two children, all-out war is the only probable outcome.

Nestled amongst your De Niros and Pacinos is a career-best turn from John Cazale, reprising his role as Michael’s wayward and worrisome older brother, Fredo. The slow-burning emotional fulcrum of the film – rather than Michael and Kay’s disintegrating marriage – Fredo’s tempestuous relationship with the superseding Don Corleone crackles with not only mutual distrust but also conflicting affection. Blood, it’s presumed, is thicker than water – yet the quote from Michael at the top of the piece would suggest that even family ties have their sell by date in a world polluted by betrayal, corruption and all-encompassing greed. In contrast, a far simpler moral code is enforced by De Niro’s lean Vito, who sets his sights on gluttonous neighbourhood bully Don Fanucci (a detestable Gastone Moschin).

Rereleased in UK cinemas this week thanks to a spectacular 4K Park Circus restoration, whilst also coinciding with the British Film Institute’s Al Pacino season, The Godfather: Part II arguably sees Coppola at the height of his powers. Combining the director’s key interests in dysfunctional family units, social stratification and the seething undercurrent of violence inherent in all positions of power, Coppola’s mafia sequel not only succeeded in dwarfing its still terrific predecessor in terms of drama and scope, but also brought together De Niro and Pacino on screen for the first (but thankfully not the last) time.

The Godfather: Part II is rereleased as part of the BFI’s Pacino season. For more info, visit whatson.bfi.org.uk.