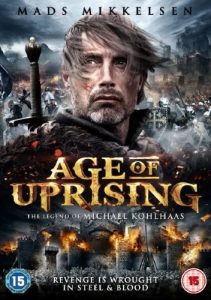 ★★☆☆☆
Following the runaway success of Danish director Nikolaj Arcel’s A Royal Affair (2012) a couple of years back, another period European drama of revolt and revenge starring the magnetic Mads Mikkelsen would undoubtedly have seemed like an excellent idea. Somewhat regrettably, Arnaud des Pallières’ Age of Uprising: The Legend of Michael Kohlhaas (2013), adapted from the Heinrich von Kleist novella, not only fails to live up to the mark but struggles to work on a more fundamental level. Even the presence of the venerable leading man fails to elevate this glossy but staid vengeance drama that repeatedly struggles to either quicken the pulse or provoke the mind. 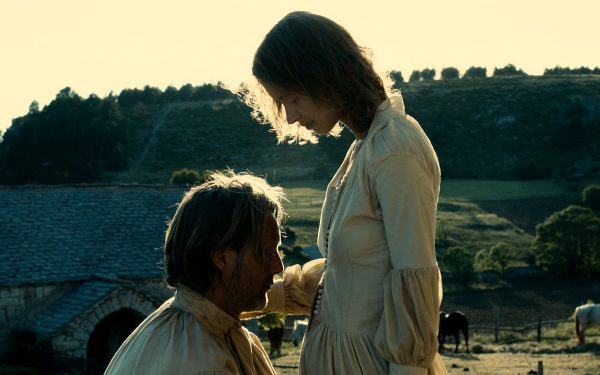 In 16th century feudal France, we find the eponymous Kohlhaas (Mikkelsen) as a horse trader living in the Cévennes. On his way to market one day, he is waylaid by a local Baron who claims two of his prize horses as collateral for his passage through his land. When Kohlhaas returns, he finds the thoroughbred horses beaten and overworked and the servant he left to mind them savaged. He refuses to take the horses home until them have been nursed back to health and seeks reparation for the Baron’s crimes through the law courts. The Baron’s influence is far-reaching however and, after the case is dismissed from court, Kohlhaas’ wife (Delphine Chuillot) is beaten to death by the Baron’s lackeys, spurring our man to revenge.

The problem that Pallières’ take on this story has is that the (extremely) measured pacing and stiff aesthetic serve to diminish the dramatic impetus that the story inherently contains. Mikkelsen does a reasonable job of embodying this increasingly fanatical quest for restitution, bringing the same steely gaze that makes him a terrifying Hannibal Lecter, but it cannot make up for a story lacking severely in punch. There are some sequences that work – a raid on the Baron’s castle by Kohlhaas and his loyal men plays with tension as the men check all the angles and fell their adversaries, crossbow in outstretched hand – but this ultimately highlights the monotony that permeates elsewhere.

The figure upon whom the Kohlhaas character was reputedly modelled (Hans Kohlhase) was more of a villain than his fictional doppelgänger. While plot elements morph Michael into some kind of Robin Hood- style crusader, however, there is a distinct lack of emotional resonance to his plight, even after the death of his wife and in the ensuing relationship with his daughter. Even with European arthouse stalwarts like Bruno Ganz and Denis Lavant popping up at his side in cameos, Mikkelsen’s attempts to liven Age of Uprising end up feeling as futile as Kohlhaas’ pursuit of justice.